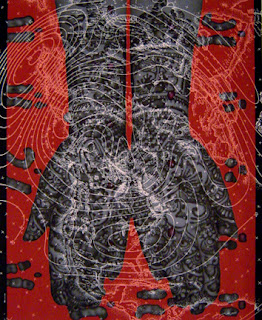 Deborah Cornell's work is comes across to the viewer as bold, ambitious and technically seductive. She bridges the divide easily between flat work, installations and virtual reality, and tackles issues relative to the physical to cultural, geographic to genetic. The piece above is called Repercussion III. In it, we see a pair of hands opened before us as if they presenting a gift. The hands are subtley layered with Indian henna-painted designs. Swimming around them are elements of  genetic strains and overlapping it all are what look to be global weather diagrams. So, what is it all about?

She has always projected an interest in global issues and an overlap of ideas which are present in her prints. In Cornell's "Space left Vacant" and her "Species Boundaries" series, one gets more of an overview interest in Cornell's work for our own species and how it has and will evolve genetically, how the species seem at once polar opposites, and yet have visual, if not genetic, connections. The visual references she promotes with human hands; how they are visually similar and then show the destructive progressions of arthritis  can be viewed as internal fears of one's own genetic break-downs as we age, both as a person and as a society. 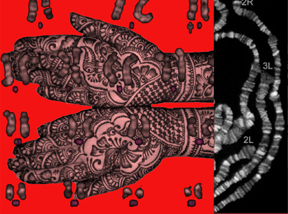 In her "Games of Chance" series, the obvious is stated whereby she presents images that combine broken genetic strains, bacteria, sperm, disastrous global warming maps and aspects of game-playing via cards, chess. Evolution of the human species, let alone the multitudes of other species, is a luck of the draw and no one's survival is assured. "Straight Flush" pictured below makes that statement very clearly. 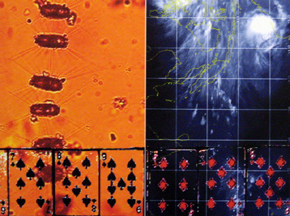 The blend of her subjects is maybe more directly connected than say the work of Robert Rauschenberg or David Salle, but there is a similarity in her collage of seemingly disparate images. The scale of her work is expansive and colors are strongly confrontational. The effect is work you can't walk away from, nor does one  want to. The prints are seductive and implore the viewer to come closer - like a moth to the proverbial flame.

Cornell's been teaching at Boston University for some time, and has built up an impressive list of international awards and credentials. She is also known for establishing the Experimental Etching Studio and has continually stretched the parameters of printmaking.One can find out more about her work at http://www.deborahcornell.com
Posted by Tparker at 9:07 AM