Lisbeth Firmin Reaffirms the Solitude of the Urban Scene 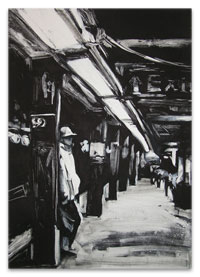 A 'wow' moment occurs every time someone sees the prints of Lisbeth Firmin. You just can't help it. Her painterly background comes through so well that it could easily be assumed these were paintings, not prints.  But Firmin crosses that medium bridge, the same as have numerous other painters who have attempted that so-called step-child to real painting method called monotypes (sorry, not my opinion for I have done many, but some see it as experimental and not 'true' printmaking),  breaking up the routine of working on a canvas or panel. Firmin effortlessly 'crosses over' to the printmaker's side exuding confidence and a directness that captivate us just to see what she will do in black and white.
The excitement created from seeing Firmin's ordinary(not) urban scenes of people walking down streets or standing on bus and train station platforms is arresting, in quite the same manner when looking at a John Sloan painting. She sees the moment which would appear on first glance to be rather innocuous, but stops it, and us, in time to see what she sees, and we can't help but to say, "Man, there's something good happening there." 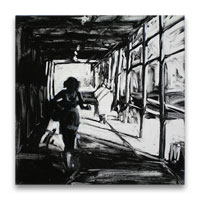 What initially captures my attention is Firmin's light and clarity. There is a respect for using the available light instead of manipulating it to work to her advantage.  It is clear for all to see what she's looking at, and she manages to get those moments we city dwellers and visitors have all seen in a large urban setting when it seems we are nearly alone except for one or two other people. It always seems impossible that cities have their lonely patches, but Firmin finds her own solitude again and again, showing us her affinity with Edward Hopper's isolated figures within a larger arena.

Firmin states that she is "a contemporary American realist whose imagery explores the relationship between people and their environment...depicting modern life while exploring timeless themes of solitude and isolation; interpenetrating the light and shadow that describe the human form in a specific moment."  She skates the rails between realism and abstraction the much the same way David Park, or some of Richard Diebenkorn's figurative work, does. Firmin wears her environment well, and casually shows us the big bad cities aren't really so bad after all. They may be full of people going about their business, absorbed in their own thoughts, but a street filled with people can make us feel just as alone as one with a solitary figure walking down the block. Alone-ness is relative; as much a product of our environment as our own mind. 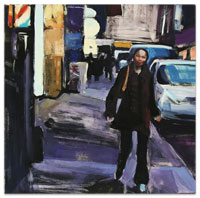 Firmin may show us points of isolation, but they never approach the point of voyeurism. We are a part of these images, not outsiders peering into their world. Neither is the black and white of her work cold or distant. Firmin's is a world warm and pulsating with life from those unseen. The below picture says to us, 'Hey, Look at that. Let's walk over and what's going on.'  I agree wholeheartedly. Let's. 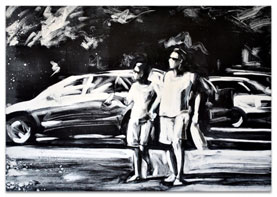 Note* Lisbeth Firmin was born in Paducah, Kentucky , and now resides in the village of Franklin in upstate New York. She teaches painting/printmaking at the University of North Carolina School of the Arts, Winston Salem, NC, Truro Center for the Arts, Castle Hill, Cape Cod, and at the SVA's continuing education program. For more information on her work, see the link here .www.lisbethfirmin.com
Posted by Tparker at 4:40 PM