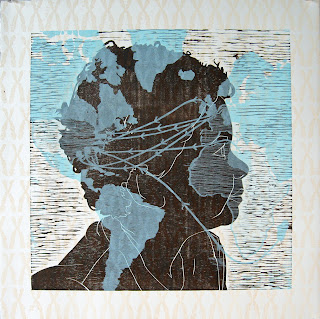 Kristin Powers Nowlin's recent work brings together some often-discussed aspects of being an American - we are a 'melting pot' culture.  While this is certainly not a new topic to those of us residing in this country. It is  one of the things that make us unique in the world's migration history, but it also is a current social/political situation that affects millions of people world-wide, which may, in fact, forever exist.

Nowlin's "Chromosome Genetic Mapping" shows us  the profile of a small child, over-lapped by a global   migration map. The direction of the migrations suggest the genetic makeup of the child's heritage; as it's ancestor's have come to the United States, and indicating in which states they settled. The background is covered with a repetition of chromosome genes serving as a backdrop, and undertone for the image.

This image comes from Nowlin's Red Roots series, in which she says..."This body of work challenges and questions the way American culture defines and determines race. The specific images are symbols for the ways that either our popular culture or our scientific/academic culture have used specify the race of a given individual."http://www.kristinnowlin.com/


Of Nowlin's other series, she has been exploring various aspects of her own personal narrative along this subject, but I find the Red Root series has the more directed message of migration, genetic global evolution and story-telling. Her other series address the situation as well, but I am drawn to this image and the series it comes from. The blending of genetic streams is more direct and clear.


Nowlin's use of the relief method is also appropro to the antiquity and heritage of the printed image. Our earliest methods of printed imagery are in relief, and in that she respects the parameters of the medium. Her simple, clean lines, over-lapping translucent colors also correspond to the message of genetic layers which comprise all people living in this culture. Nowlin also says this series should examine the unique story of American race identity. It does that, and we will  see where this stream of social confluence will flow.
Posted by Tparker at 1:32 PM