Manuel Rodriguez, Sr, a.k.a. Mang Maning,  is a pioneer in the Philippines’ graphic arts movement. He turned 100 last year and continues to make art and spread the word about what has become his true passion – printmaking. Rodriguez said, “I have to fulfill something but I don’t know what, but I think I will just continue, then I will know when it’s time to go.” 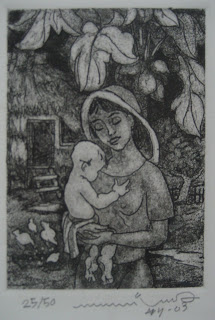 Rodriguez was born in Cibu in 1912. His father was an engraver and goldsmith for liturgical vestments and church ornaments. Rodriguez left Cibu in 1935 and moved to Manila to attend the University of the Philippines School of Fine Arts, where he was mentored by Philippine artists Toribio Herrera, Fernando and Pablo Amorsolo, Fabian de la Rosa, and Ramon Peralta. 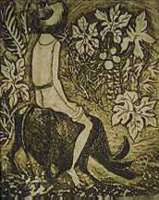 In the 1930s Rodriguez was first introduced to the art of printmaking and in 1948 he spent a lot of his time reproducing his paintings via screen printing methods. Rodriguez began to really experiment with printmaking in the 1950s, making greeting cards of rural Philippine life. 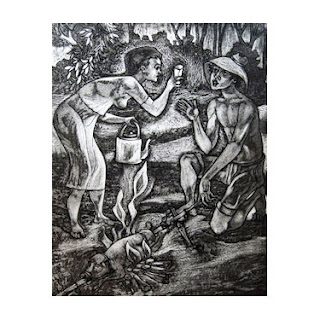 He left the Philippines in the 1960s for New York to pursue a Rockefeller printmaking scholarship at the prestigious Pratt Graphic Center. It was during 1960-62 that Rodriguez worked in the print department of the Museum of Modern Art, after which he repeatedly visited the famed Atelier 17 in Paris, run by British artist and teacher Stanley William Hayter. Here he met with other printmakers Mauricio Lasansky, Gabor Peterdi, and Michael Ponce de Leon and his works developed into an abstract imagery which defined his particular style. 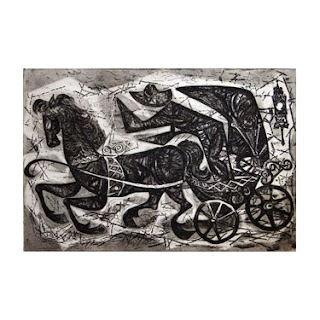 When Rodriguez returned to his native country, he taught and established printmaking departments at UST and PWU, where he brought with him all the knowledge he’d learned from the US; teaching younger artists about printmaking and spreading the word and interest in it so much that it grew to become popular at a time when experts thought printmaking was a ‘dead art’. In 1962, he opened the Contemporary Arts Gallery for graphic artists and sold his students’ work. Printmaking changed the course of his career, and his influence was felt mostly between the 1950s to the 1970s. 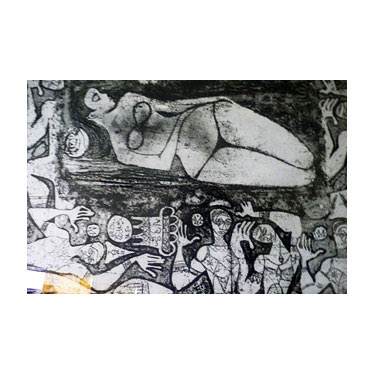 Eventually, Rodriguez moved back to the United States in the 1970s and settled in New York. His enthusiasm for printmaking has known no bounds. He continues to teach and give workshops.  He says, “First, I learned what is art and then I learned what is printmaking, so I want in my life to fulfill the purpose, to explain, or to teach, everyone or to start a school where you can learn what is art.” We can only hope the enthusiasm he has felt continues to inspire young artists everywhere….. 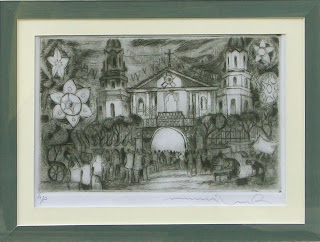