John J. A. Murphy and the Mechanical Figure 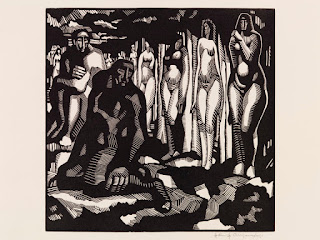 John J.A. Murphy’s (1888 - 1967) work has strong alliances with the Cubist art movement he would have seen in Europe. His work has close affinities with the work of Fernand Leger, Picasso, and some of the later German Expressionist printmakers like Heckel and Schmidt-Rotloff. 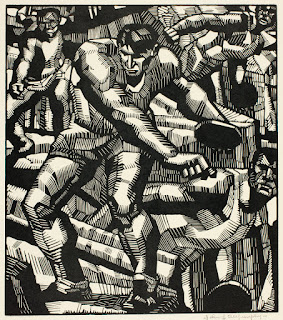 An impressive element of Murphy’s work is the wonderful concrete-block look of his figures and the robotically-massive presence they have. The subjects vary from religious to athletic competitions and male wrestling. The weight of these figures fills his compositions to a near-bursting, and lets us feel as though we are a part of the activities taking place. 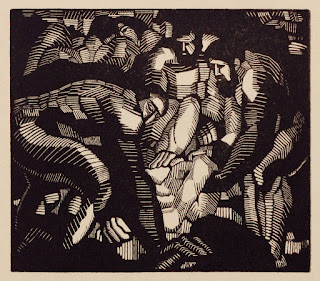 Murphy’s work fill our eyes with linear, built-up male figures who represent all things masculine and power-filled. They roll around the picture plane and struggle amongst themselves for dominance, but ultimately fail since all the figures are equally weighted. The effect though is a tour de force of characters that endlessly fight for our attention. The result is a visual exhilaration. Murphy’s work is terrific. 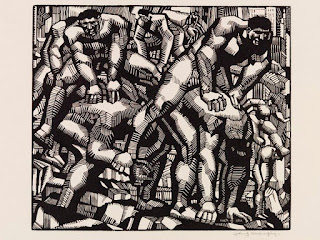 Murphy was born in Boston, Massachusetts. He studied art at the Boston Museum of Fine Arts, and the Art Students League, in New York City.
Murphy first worked as a portrait painter and then moved to London to be a painter’s assistant to Frank Brangwyn. 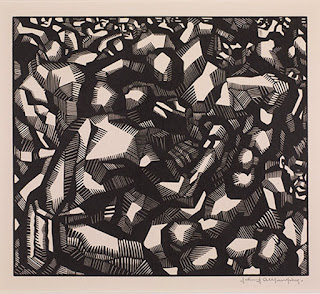 During WWI, he served in the Army Corps of Engineers’ camouflage section in France, and illustrated posters.
When he returned to New York in 1921 he exhibited his prints at Keppel's Gallery and Walker Galleries, in New York; and exhibited at the Leicester Gallery, in London.
He also designed book illustrations and typography. 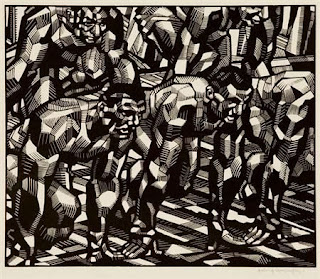 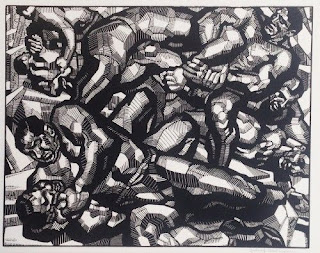 Awards:
Dictionary of American Painters, Sculptors and Engravers
Fellow, the Metropolitan Museum of Art
Member, the Guild of Free Lance Artists
Who’s Who in American Art

Wishing all my inked up friends a very Happy Easter, with plenty of eggs and rabbits and chicks and peeps and Easter egg hunts and daffodils, etc, etc, etc.... 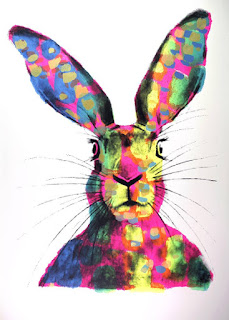 Posted by Tparker at 3:35 PM No comments: 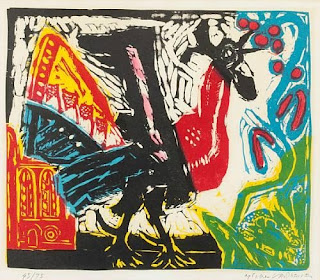 British artist, Michael Rothenstein, (1908-1993) was a prolific artist who earned a worldwide reputation as one of the most exciting British printmakers of the twentieth century.
Born in Hampstead, London, he was the youngest of four children born to the celebrated artist, Sir William Rothenstein (1872-1945). His older brother, Sir John Rothenstein, was also well-known as head curator of the Tate Gallery. 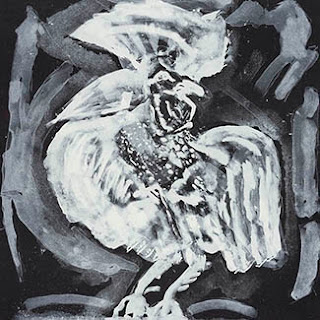 Rothenstein was home-schooled and studied art at Chelsea Polytechnic, and later at the Central School of Arts and Crafts.
During the late 1930s he exhibited landscapes and in 1940 he was commissioned to paint topographical watercolors of endangered sites in Sussex for the Recording Britain project (organized by the Pilgrim Trust). 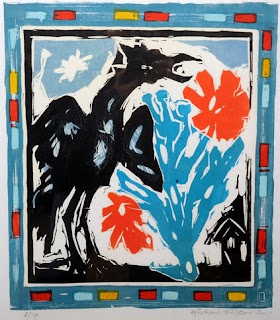 In the early 1940s he moved to the north Essex village of Great Bardfield where there was a small resident art community. He exhibited frequently at the Redfern Gallery, in London, and during this time he became interested in printmaking.
Rothenstein organized the Great Bardfield Artists exhibitions during the 1950s. Thanks to his contacts in the art world, these exhibitions became nationally known and attracted thousands of visitors. 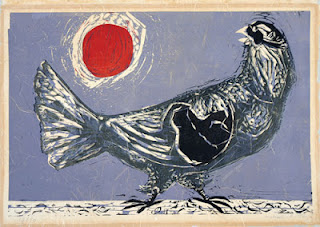 From the mid-1950s Rothenstein focused his energies on printmaking. He became known as one of the most experimental printmakers in Great Britain during the 1950s and '60s.

From 1936-1956 he was married to the artist, Betty Fitzgerald, who was later known as Duffy Ayers, and the couple had two children. In 1958 he married Diana Arnold-Forster. 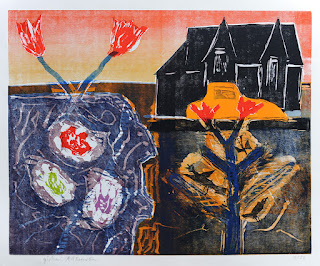 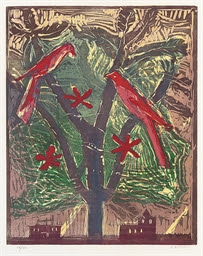 Rothenstein taught art at Camberwell School of Art and Stoke-on-Trent College of Art, and he lectured extensively throughout the USA.
He authored several books on art subjects including Frontiers of Printmaking , 1966, Relief Printing, 1970, Suns and Moons, 1972, and the folio Song of Songs, 1979. 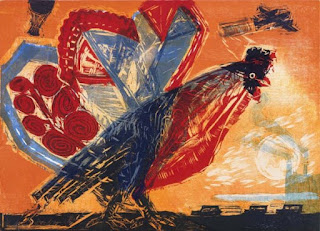 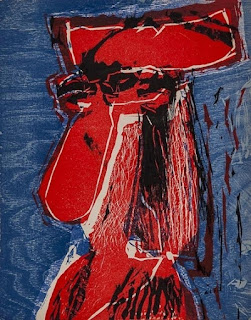 Rothenstein gave to British art a particular liveliness and a sensual flair for color and texture. His fascination with birds, (cockerels) was brash and wildly popular. The artistic and cultural symbolism for using roosters or cockerels is varied. 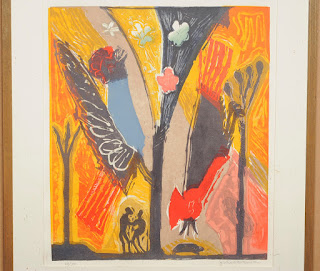 Since antiquity the rooster has been, and still is, a sacred animal in some cultures and deeply embedded within religious worship. The term "Persian bird" for the cock appears to have been given by the Greeks after Persian contact, but in Iran, during the Kianian Period, from about 2000 B.C. to about 700 B.C., the cock was considered a sacred bird. 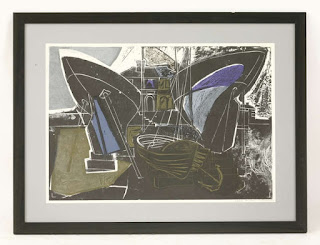 The cockerel was a symbol in Gaul at the time of the invasion of Julius Caesar and was associated with the god Lugus. Today the Gallic rooster is an emblem of France. In the Chinese zodiac, the Rooster is a symbol of honesty, moral fortitude. Of the Yang attribute, it signifies fortune, luck, fidelity, protection as well as bossiness. Some of Rothenstein’s roosters are performing the cockerel dance – a mating ritual where they fan out their wings and bristle up their feathers to show they are dominant, and of good mating stock. 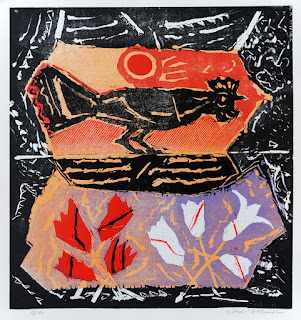 I enjoy seeing the brushy bluster of Rothenstein’s birds and the crazed dominance they exude in his compositions. The flair of the rooster’s spirit is evident in his work and we know their cockerel dances with extend well beyond the compositional borders Rothenstein presents. These prints are still quite a bargain, so snatch up a few for your print collections, my friends. 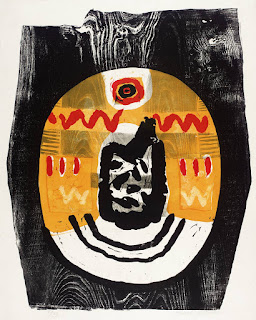