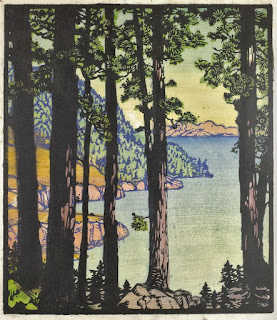 Frances Hammell Gearhart (1869 –1959) was an American artist known for her vibrant and colorful prints of America’s (Californian) landscape.
Born in a small village called Sagetown, in Illinois, she moved to California in 1888 and began studying at the State Normal School at Los Angeles (now UCLA). After graduation she supported herself by teaching high school English. 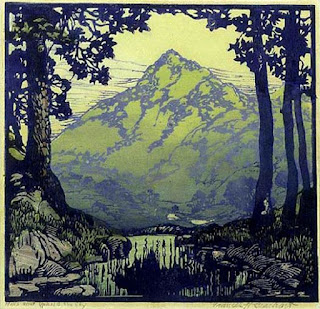 At her first one-person exhibition in 1911 at Los Angeles’ Walker Theatre Gallery the local art critics described her as a promising colorist. Gearhart’s sisters, May and Edna, taught her printmaking after they studied at the Ipswich Summer School of Art in Massachusetts with Arthur Wesley Dow. It is estimated that she created 250 editioned prints. 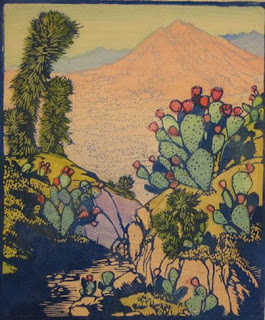 Influenced by the Arts and Crafts movement, Gearhart made prints that featured strong use of black or blue lines with rich colors offset against deep backgrounds. She frequently made compositions of country paths, roads, and waterways to lead the viewer into the image. The combination of her lines with atmospheric color was well suited to depict California's beautiful landscapes. 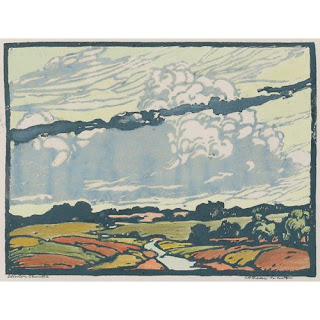 Gearhart devoted herself full-time to art in 1923. She and her sisters then set up an art gallery in Pasadena, CA, where they curated printmaking exhibitions.
Her art production declined after 1940 when her eyesight began to fail. She died in Pasadena, California. She is now recognized as one of the most important American printmakers of the early 20th century. 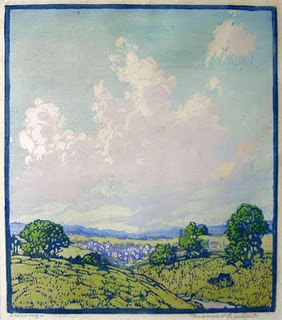 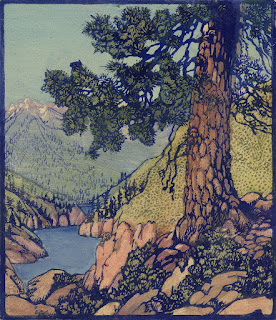 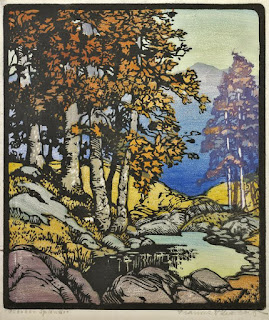 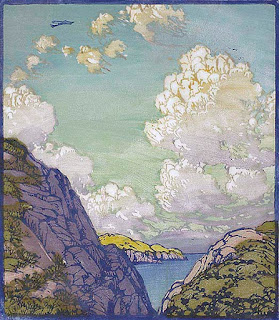 Her work is included in numerous museum collections. 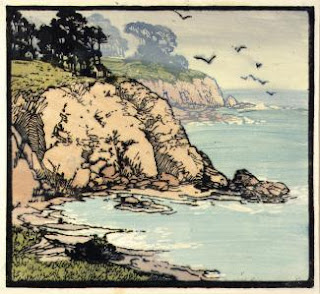 American Innocence Through the Eyes of Winslow Homer

Greetings everyone! Hoping your summer is turning out to be a pleasant one. I was looking for a printmaker whose work portrayed the joys of summer, and the joys of an idyllic period when people could walk the beach, play along the shoreline and admire the beauty mother nature continues to bless us with. To my surprise I found that Winslow Homer had created such images in his prints.Being more familiar with his other media, these images were a delight to find, so I decided to share them with all of you inked up family out there. 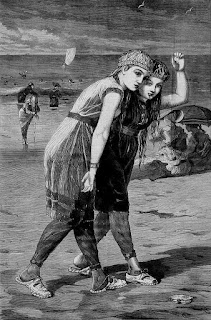 Homer's got a fantastic sense of light, line and composition. He captures our activities on the beach or playing in an open field. His era is late in the 19th century, when America still felt innocent of the terrors of the world. The scenes are sedate, showing a slower pace of life, and they are most welcome. Homer gives us a slice of life nearly lost. We can view these images and feel the quietude of sitting by a campfire, or digging for shells on the beach, or fishing alone on a river. We can see the intenseness of the task at present and can appreciate the ability of the subjects to focus on the project before them. The characters aren't distracted with iphones, or earbuds, or motor boats. This is an time when one can commune with Nature and being present with our friends is expected rather than fight for someone's attention to get them away from their cell phone. 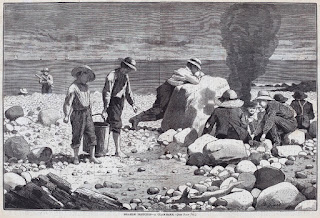 Homer's prints reflect similar subjects as are found in his other works. They have the same feel, although he tended to keep these images fairly literal more than his painted media pieces which evolved into a semi-abstraction. They are clear in minute focus. The soldier sitting in the tree setting his bead on a target is a quirky composition, but we feel his intense stare. The girls walking on the beach in their swimwear are a marvel for us when compared with their scantily clad granddaughters of today. The boys on the canoe fishing and playing in the sand have a Huckleberry Finn vibe. 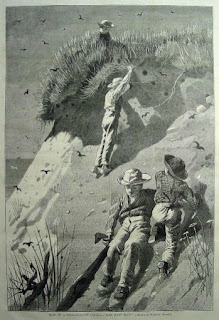 All in all, Homer made some mighty fine prints. Here's his biography for you to get more information about his work and influences. 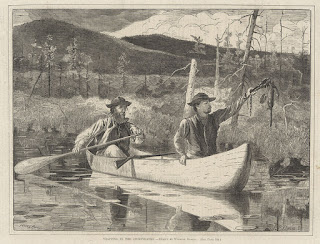 Homer (1836 – 1910) was the preeminent figure in 19th c. American art. He was mostly self-taught and began his career as a commercial illustrator; eventually he developed a reputation for capturing the essence of simple 19th c. American life. Born in Boston, Massachusetts, he grew up mostly in the Cambridge, Massachusetts area. Homer’s mother was an amateur artist and his first teacher. Homer's father sought fortune in the California gold rush, but when that failed, he left his family to go to Europe. After Homer graduated from high school, his father arranged for an apprenticeship for Homer with J. H. Bufford, a Boston commercial lithographer, with whom he worked for the next two years. 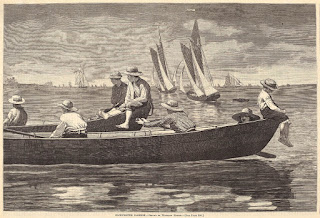 Homer's illustrations contributed to several magazines about life in Boston and rural New England. His early works are often defined by his use of clean lines, simplified forms, dramatic contrast of light and dark and engaging figures. Prior to 1859, Homer lived in Belmont, Massachusetts in his uncle's mansion, which was the inspiration for a number of his early works.In 1859, he moved to New York City and opened a studio in the Tenth Street Studio Building. He attended classes at the National Academy of Design until 1863. His mother tried to raise funds to send him to Europe for further study but Harper's magazine sent him to the front lines of the American Civil War, where he sketched scenes of battles and camp life. 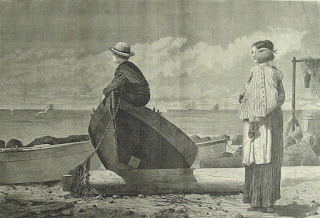 Homer also illustrated women and the effects of the war on the home front. During this time, he also continued to sell his illustrations to periodicals. After the war, Homer turned his attention primarily to nostalgic scenes of childhood and young women.

Near the beginning of his career, Homer demonstrated a maturity, depth of perception, and mastery of technique. His realism was objective, true to nature. 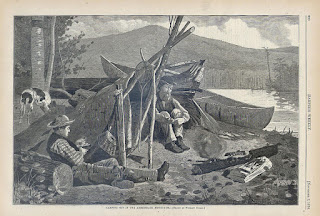 Before exhibiting at the National Academy of Design, Homer traveled to Paris, France in 1867 where he lived for a year. He practiced landscape painting while continuing to work for Harper's, depicting scenes of Parisian life.
Homer's main subject for his paintings was peasant life, showing more affinity with the French Barbizon school and the French artist Millet. His interest in depicting natural light parallels that of the early impressionists, as he was already a plein-air painter in America. 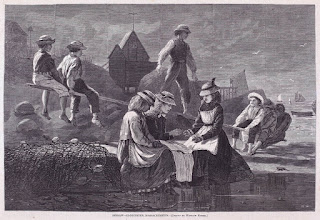 Throughout the 1870s, Homer continued painting mostly rural scenes of farm life, children playing, and young adults courting.
He became a member of The Tile Club, and for a short time, he designed tiles for fireplaces.
He started painting with watercolors on a regular basis in 1873 during a summer stay in Gloucester, Massachusetts. From the beginning, his technique was natural, fluid and confident. The impact of these works was extraordinary. 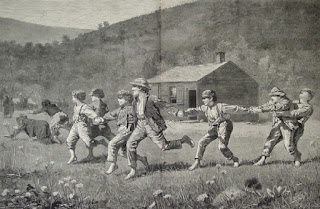 Homer became reclusive in the late 1870s, living in Gloucester. For a while, he even lived in secluded Eastern Point Lighthouse . In re-establishing his love of the sea, Homer found a rich source of themes while closely observing the fishermen, the sea, and the marine weather. After 1880, he focused mainly on working men and women.
In 1883, Homer moved to Prouts Neck, Maine (in Scarborough), and lived at his family's estate in the remodeled carriage house close to the ocean. During the rest of the mid-1880s, Homer painted the sea. 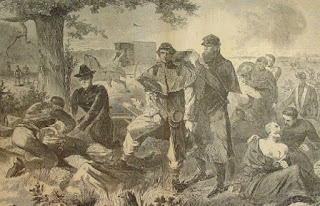 Homer had become a "Yankee Robinson Crusoe, cloistered on his art island" and "a hermit with a brush". The New York Evening Post wrote, "in a place by himself as the most original and one of the strongest of American painters." 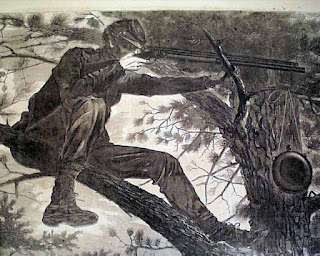 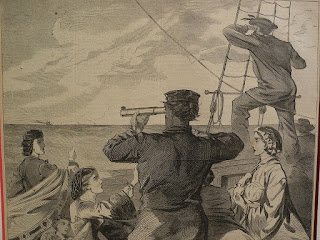 Homer frequently visited Key West, Florida between 1888 and 1903. He also traveled to Canada and the Caribbean. He died at the age of 74 in his Prouts Neck studio, which is now a National Historic Landmark owned by the Portland Museum of Art.

Homer never taught art but his works strongly influenced later generations of painters for their direct and energetic interpretation of man's relationship with Nature. Robert Henri once called Homer's work an "integrity of nature". The innocence that his images project is appealing; a view of a simpler time, a state of being. 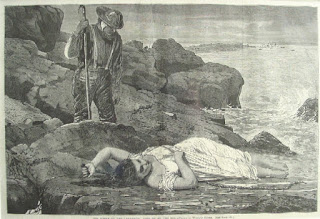 Homer's attitude about his working method is best captured in this quote: "Look at nature, work independently, and solve your own problems." 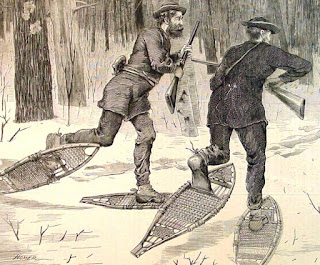 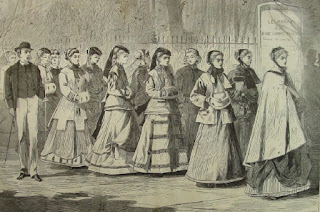 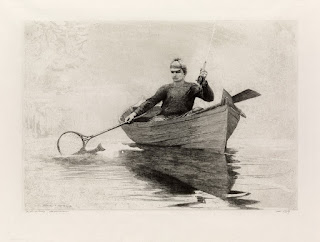 Posted by Tparker at 4:32 PM No comments: