Welcome to Margo's World: The Prints of Margo Humphrey 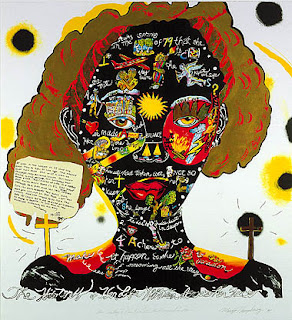 Just gaze upon the beautiful woman before you. See her doe-like eyes,  luscious red lips, silken hair and an iconic pose that rivals any Christian Madonna. The History of Her Life Written Across Her Face (1991) is one of Margo Humphrey’s most recognized images.  Here, the artist has given us a formal connection to portraiture, but the artist has also given us a rare insight. She has chosen to let us into the world of the subject; making visible the commentary in her head, what she hears. It looks playful, but there are dark thoughts behind the façade. That, and her The Last Bar-B-Que (1987) which played with traditional representations of the Last Supper and Christianity, added a distinctly Caribbean/African-American perspective to the final meal when she added chicken, bananas, watermelons, and mangoes. Humphrey shifts the somber occasion and infuses it will color, joy and humor. 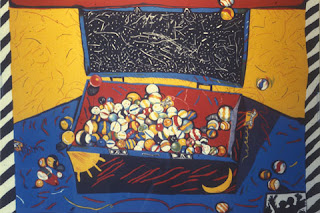 Humphrey is one of the artists of the later 20th century that enjoyed attention in the Pluralist era. She falls squarely within the multicultural period when artists of color were given the art world’s limelight, not that that mattered to her or her work at all, but she was able to utilize the attention to bring about a message of multi-cultural emphasis, and seamlessly blended it all together in a body of work that is striking for its bold, expressive color, animated figures and sometimes humorous take on relationships and religion. ‘…her works offer artful commentary on American culture, including food ways, folkways, spirituality, love and loss.’ 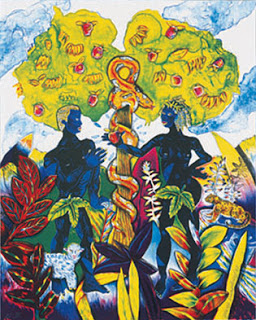 Humphrey takes us on a journey telling us about the story of what it is to be an African-American female artist during the Feminist period of the 1970s, and shows us how her work speaks about a larger message of the human spirit; how one’s life crosses continually between the physical and spiritual worlds. Her iconography addresses issues of race, gender, and spirituality. 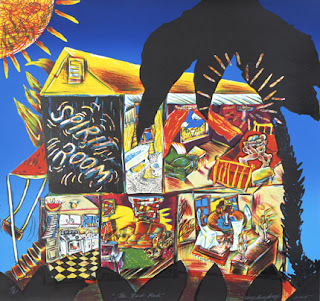 Her visual connections between other artists of the era, like Hollis Sigler, Jean–Michel Basquiat, Elizabeth Murray and Red Grooms convey a sense of something initially comic and humorous, but the deeper layers show an underside of reality that isn’t always so pleasant. 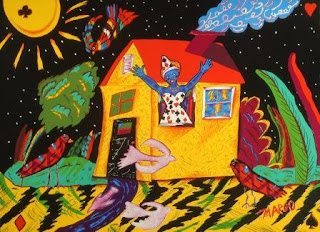 Humphrey’s prints have become iconic in the consciousness of her peers, and her vibrant, lively images lift her characters off the paper and into the lives of the viewer. Whether her images are about a childhood experience or they confront a personal demon, Humphrey's artwork conveys a sense of hope and promise. Her unique language is easily accessible and we empathize with her personal memories as if they are our own. 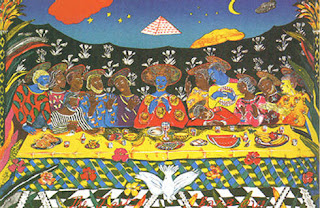 Biography:
Margo Humphrey was born in Oakland, California in 1942. She received her Bachelor of Fine Arts degree from the California College of Arts and Crafts and in 1971 she was awarded a Fellowship to The Whitney Museum of American Art Summer Program while attending graduate school at Stanford University. She graduated from Stanford in 1972 with a Masters of Fine Arts degree in Printmaking. After her studies, she traveled in Europe, Brazil, the Caribbean, and Africa. She also taught art in Benin, Nigeria, Uganda. 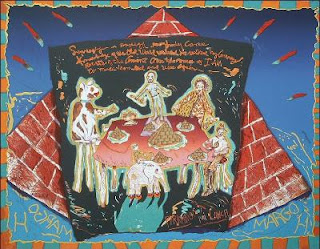 Her work has been shown in solo and group exhibitions in the United States and internationally In 1996, she was included in the Museum of Modern Art’s International Invitational World Printmaking Survey exhibition. 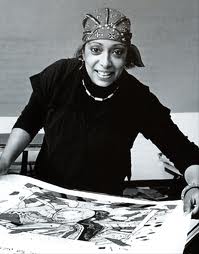 I am adding to this article, as it was just passed along to me via Chicago's Anchor Graphics' Master printer David Jones, that Ms. Humphrey has just completed a new lithograph with  Anchor called  "Black Madonna". See it here below and contact Anchor at www.colum.edu/anchorgraphics before they all disappear into private collectors' hands.... 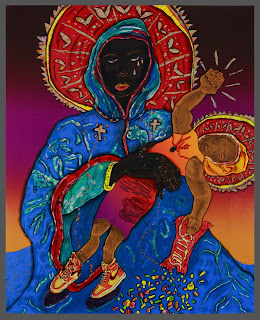 Contact the artist at email: humphrey@umd.edu
Posted by Tparker at 3:47 PM