The Most Expensive Prints in the World...Really? 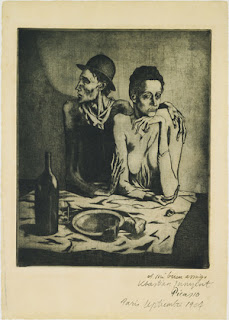 Well , my fellow inksters, some scouting around for examples of the top selling original prints at auction generated some varying reports, but I think I have grasped recent information to impart. You will pardon me for not knowing the very latest information, because I don't usually hang at the local art auction house. Being an artist myself, I'm likely to spend my cash on supplies than another work of art, and besides, it seems these auction things take place quite a lot so the information is always changing. :)

My quest to find the most expensive print in the world, lead me first to Pablo Picasso’s “Le Repas Frugal”, (pictured above) which was a bit of a surprise. I mean, really, this one is nice and all, but I guess I supposed that something by Rembrandt or Durer would claim the top prize. Still, there is something in this piece by Picasso that grabs the viewer. The primordial couple sitting very intimately at a table, looking out at the world, as if they hadn’t a care. The fact this piece comes early in Picasso’s oeuvre, lends some intrigue for the period the work is associated with – namely the carnival and Rose period. The couple’s faces are drawn and their gaze seems detached from the world around them. Their bodies are elongated as one would expect to see if El Greco was alive and working in the 20thc., but they aren’t representing celestial beings, just the average Parisian starving artist. 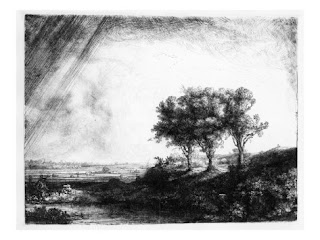 Then, after more investigation, I discovered there are subcategories to the original print auction records, and low and behold, some other surprising names and pieces popped up. I will give a listing and a sampling of them at the end of this article. More predictably, Rembrandt’s Three Crosses,” a 1653 etching, One impression,( about 80 are known to exist), sold privately a few years ago for $1.5 million. (It's estimable value in 1967 was a mere $20k. Yikes!) Albrecht Durer figures into the same subcategory with his famous "Adam and Eve" print.

Still, moving closer to our own time period, some of the most recent art auction sales for original prints on paper are garnishing staggering sums at auction. Pablo Picasso's “La Femme Qui Pleure I” (pictured here)now claims to the top price paid for a work of art on paper in the print category. A nice little piece, considering the subject is of a wailing woman:) 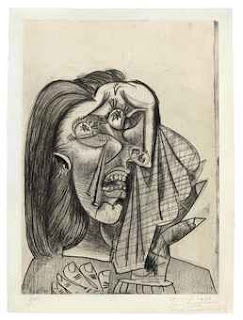 One Norwegian artist's print has recently risen to the upper levels of the charts and stolen our collective hearts. It's a quiet little color print by the tortured soul Edvard Munch. His "Young Woman on the Beach", done in 1891-92, just sold for a whopping $3.2 million. 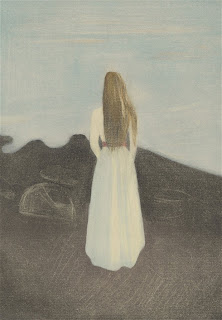 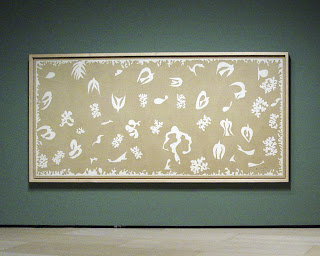 Two artists from the Contemporary category who have done well, one expectantly so, is Andy Warhol. His iconic Marilyn Monroe portrait is on the top-selling list, but it's his Chairman 'Mao" 10 portraits series that has garnished over $2 million in recent sales. They seemed a sort of quirky subject, given Mao wasn't the Iconic American figure like Marilyn was, but in the 1970s, when US President Nixon went to visit the famed leader of the eastern world, it was big news and a significant step toward what became global enterprise.

For a living artist, Jasper Johns has realized a hefty price for one of his prints, "Untitled" from 1983, where this painterly impression brought in $1.5 million in 2012.It's not exactly a favorite of mine, but it easily speaks to John's paintings.

All this fuss about some dried ink on paper, but admit it, they Are treasures in the art world, and they reflect a growing art-savvy collector base. We printmakers can take encouragement from this news, as we all know we’re not giving up the 'ink in our veins idea' that original prints are worth as much as any old bit of oil paint on canvas, or a collage, or even a .... photograph.

Truly, the real thing here to pay attention to is not how Much $ these lovely pieces of paper are Worth. The real importance to any of them is the artist who decided to make an image friom his/her imaginaiton or observations. The real importance is the result we get from seeing these images and the messages they convey to our collective souls. No one auction record could ever mean anything compared to that.

Look over these stats, and chew on those numbers. Just imagine how much paper, plates and ink we could buy with that, eh?