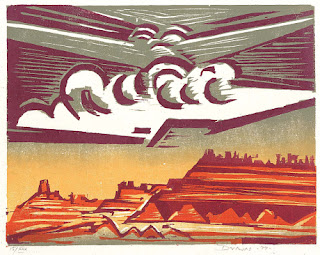 I recently saw the work of Werner Drewes and thought, "Man, how did I never see this person's work before?" It is pretty spectacular, in range and subject. He is a master of the cut mark and composition. The Variety of his color work is soft to bold and the simplicity of a female portrait is so complex it shatters our notions of a simple, yet descriptive mark. I, for one, am riveted by his work, and I hope you will enjoy this man's oeuvre as much as I have. Be sure to share this article with anyone working in printmaking, because we need to share our fellow printmaker's work with each other. 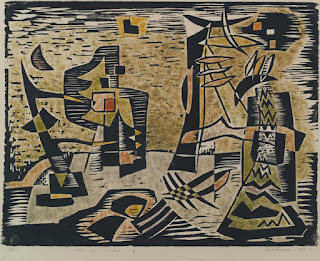 Werner Drewes (1899–1985) was a German-American artist/teacher widely considered to be one of the founding fathers of American abstraction, and one of the first artists to introduce the ideas of the Bauhaus school to the United States. 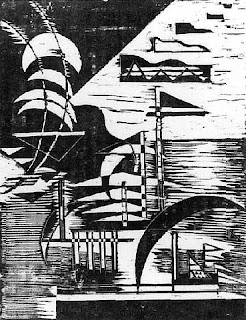 Drewes was born in Canig, Germany. In 1917, he was drafted by the German army and served in France. After the war, he made art and traveled Europe. He studied architecture at both the Königlich Technischen Hochschule Charlottenburg and at the Technischen Hochschule Stuttgartand. He then enrolled in Stuttgart's school of applied arts (Kunstgewerbeschule) and joined a group of artists and architects associated with the newly formed Merz Akademie, a college of design, art, and media in Stuttgart. He also studied at the Bauhaus, with teachers Johannes Itten, Lyonel Feininger, and Paul Klee. 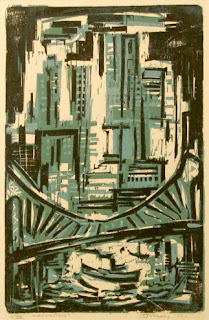 In 1923 and 1924 he studied art during travels throughout Italy, Spain, the United States, and Central America and in 1926 he traveled to San Francisco, Japan, and Korea, Manchuria, Moscow, and Warsaw. He resumed study at Bauhaus in 1927, in Dessau. He studied with László Moholy-Nagy, Wassily Kandinsky, and Lyonel Feininger. With the rise of Nazism, Drewes emigrated to the United States in 1930. His work soon captured the attention of the New York critics. 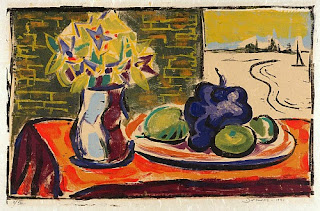 Drewes began to teach at the Brooklyn Museum Art School funded by the Federal Art Project of the Works Progress Administration. In 1936, he became an American citizen and a founding member of both the anti-fascist American Artists' Congress and the avant-garde American Abstract Artists group. Healso participated in group shows held by Société Anonyme at Black Mountain College, in North Carolina. The next year, Drewes obtained a position at the School of Architecture of Columbia University. During this time, he made prints for the Graphic Arts Division of the WPA Federal Art Project in New York. 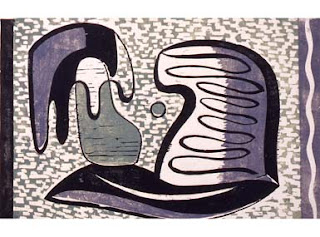 In 1940 he opened an art school called the Department of Abstract Art at the Master Institute of United Arts. In 1944 and 1945 he worked at Stanley William Hayter's Atelier 17 in New York City. Together, they improved the intaglio technique in color print-making. 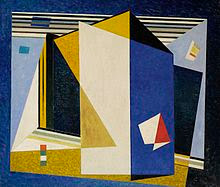 In 1945 Drewes taught at Brooklyn College and then shifted to Chicago where he joined with Moholy-Nagy to teach at the Institute of Design. In 1946 he joined the faculty of the School of Fine Arts at Washington University in St. Louis. He retired in 1965 and moved to Reston, Virginia. 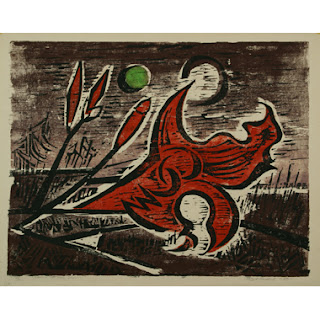 As a prolific printmaker, Drewes produced some 732 prints, including 269 etchings and drypoints, 30 lithographs, 14 celloprints, a lone silkscreen, and 418 woodcuts. His mature style encompassed nonobjective and figurative work and the emotional content was consistently expressive. Enjoy, my inked up brethren! 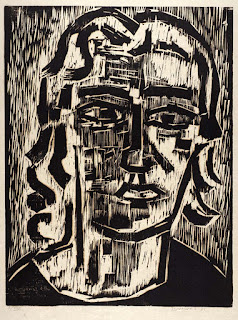 Posted by Tparker at 9:47 AM No comments:

Thinking of warmer climates and the beauty of the southwest led me to discover the work of George Elbert Burr (1859–1939). I immediately fell in love with his work and felt transported to Arizona once I saw his images of the Sonoran desert. For anyone enthralled with this part of the world, Burr gets it right when he describes the landscape's great sense of space and open sky. His sensitivity for light is key in these images; which helps one feel the time of day and the season of the year. (Yes, deserts experience seasons, too.) 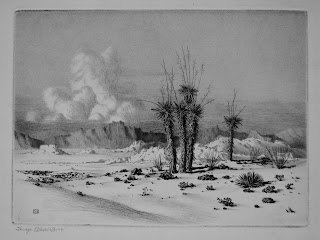 Burr captures the beauty of this rugged landscape and the plants and trees one can find there, but he also has a command of the area's mountainous terrain and the intimacy and openness we can find walking among the rocks and ravines. I think you will agree with me that Burr's work has an honesty for observation and a respect for Mother Nature. His works come up for auction from time to time, and the prices are reasonable for anyone wanting to add his printed gems to their collection. Enjoy, and see if these images don't draw you to take a trip out west to see them for yourselves. 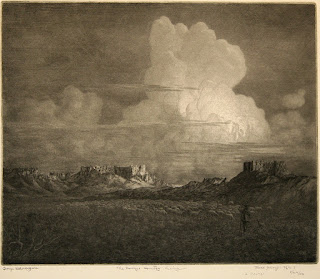 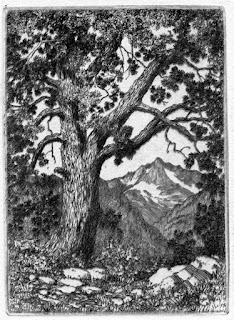 Born in Munroe Falls, Ohio, Burr moved with his parents to Cameron, Missouri, where his father ran a hardware store. Burr was interested in art from an early age and his first prints were created with the use of a press located in his father's store. 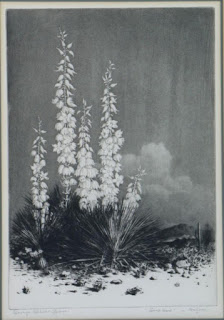 In 1878, Burr attended the Art Institute of Chicago (then called the Chicago Academy of Design). He studied there briefly, then achieved commercial success as an illustrator, providing illustrations for Harper's, Scribner's Magazine, Frank Leslie's Weekly, and The Cosmopolitan. From 1892-1896, he illustrated a collection of jade antiquities for the Metropolitan Museum of Art. During this project Burr produced etchings of over a thousand artifacts. 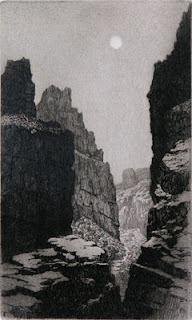 After an illness, Burr moved to Denver for his health and it was there that he began Nature studies and the Rocky Mountains. Burr spent his winters traveling through the deserts of Southern California, Arizona, and New Mexico, which prompted him to move permanently to Phoenix. The southwestern landscape and its expansive views of the Sonoran and Mojave deserts were fascinating to him, and he focused entirely on that subject for the rest of his career. 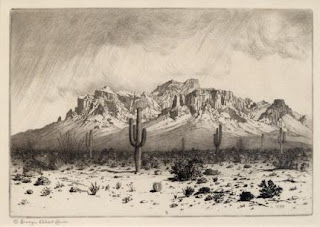 He was a member of New York Society of Etchers and the Brooklyn Society of Etchers, and president of the Phoenix Fine Arts Association. During his career, Burr created over twenty-five thousand etchings, all pulled from his own presses. 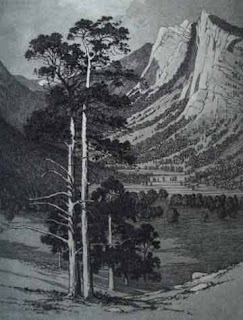 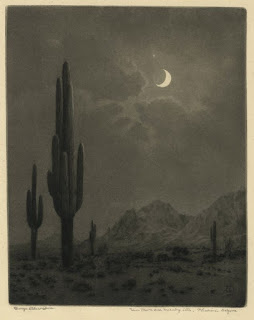 Posted by Tparker at 5:49 PM No comments: