Grabbin' Some Printed Gobble on Thanksgiving!

Hey, all you wonderful inked up people!
I just wanted to extend my heartfelt thanks to each one of you who have been reading my blog on printmakers and looking at the cool stuff we make. As the holiday season approaches, I wanted to share with you some of the printed gobblers I've found.(see the litany of printed turkeys below)

I wish each of you good cheer and a relaxing time with family and friends, and if you are far from home, remember you are always in our hearts. Take Care, my friends and have a Happy Thanksgiving! - Teresa Parker 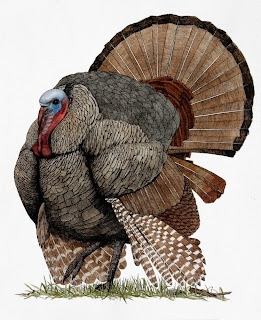 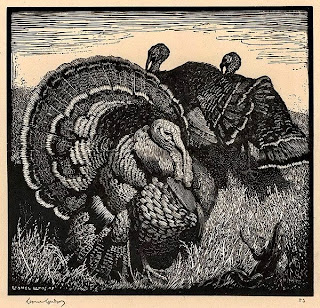 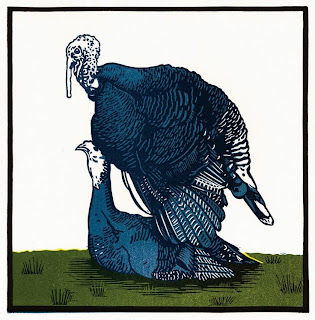 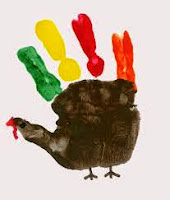 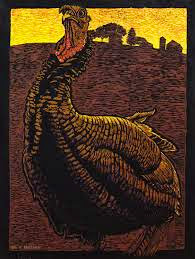 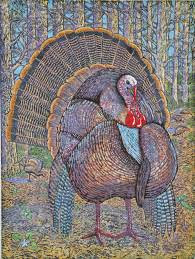 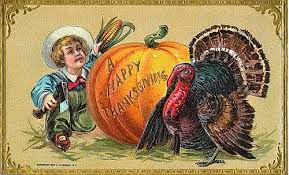 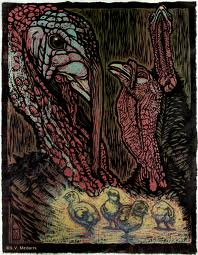 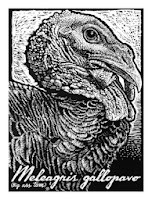 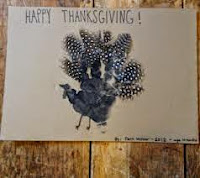 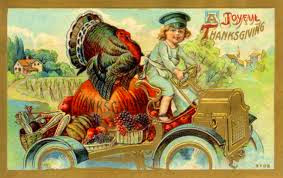 Américo Balan Abraham (1915 - 1986) was born in Ur , of the Ukraine. He was a renowned Ukrainian artist, painter, printmaker, and draftsman who lived his entire career in Argentina. 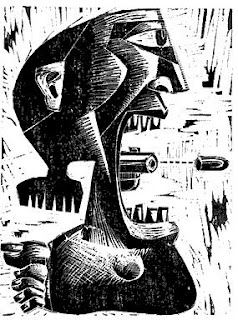 I like balan's bold , quirky figures, and how he molds them into his picture plane. The surfaces are wonderful and the expressions of the characters is funny and clever. The surreal manipulations of his figures harken to other surreal artists, but they are uniquely his own. I included a color pieces in this group, but I love the richness of his blacks and the textures of his cuts. Balan's work is still collectible, but not often seen on the market. Be sure to watch for his work. They are infinitely appealing.

Biography
Due to war, Balan’s family decided to move to Argentina in 1922. He attended and graduated from the College of Fine Arts, eventually becoming a teacher of drawing and painting. Then he spent three years studying Engineering at the University of La Plata. 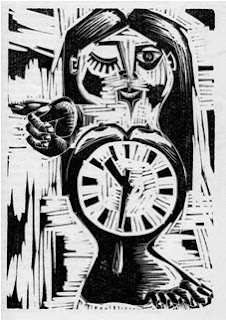 Balan taught workshops at the Association of Fine Arts. He taught art at the "Manuel Belgrano" School of Fine Arts and the "Prilidiano Pueyrren" School until his retirement. He published a text on printmaking, and as a teacher, he participated in numerous panel discussions and presentations. 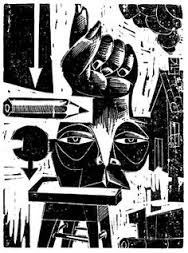 As an artist, he spent several years painting and making prints, but later concentrated his activity solely to printmaking. In his later years, he devoted himself to drawing and painting. He illustrated books and stories, and drew cartoons for newspapers, art and literary magazines. He also wrote stories and plays, and worked as a director and producer for local theater.

Balan’s artistic and international recognition was highly praised by the art critics.
Between 1947 and 1986, he exhibited his work in 28 solo and 50 group exhibitions, and he participated in Argentina’s artist delegations for the International Biennials in Mexico, Tokyo, VI Bienal de São Paulo, Switzerland and Italy. 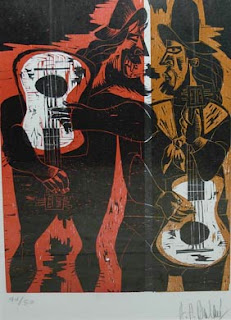 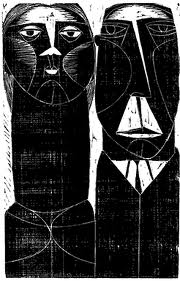 His prints are included in the book ‘Delicacies’ by Ramón Gómez de la Serna. 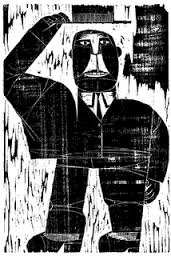 Neil Shigley's Portraits of the Homeless 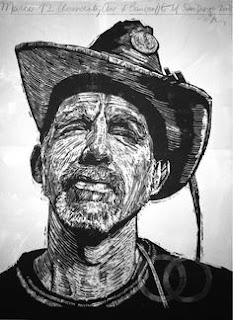 Neil Shigley, was born in Columbus, Ohio, into a military family. He has lived in France, Korea, and several places in the United States, and now resides in the San Diego area. Shigley was exposed to art and culture in the places his family traveled, and by watching his father and older brother make art. He studied art at San Diego State University, then went to the Art Center College of Design in Pasadena, where he studied illustration and printmaking. 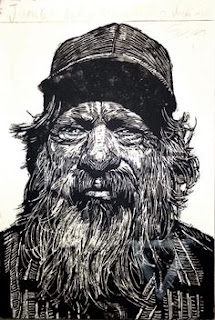 He lived and worked as an illustrator in New York City, and did numerous commissioned portraits for magazines and other media. He returned to San Diego in 1990, and transitioned to making fine art. He began teaching at the Academy of Art in San Francisco, then eventually at San Diego State University and Point Loma Nazarene University. 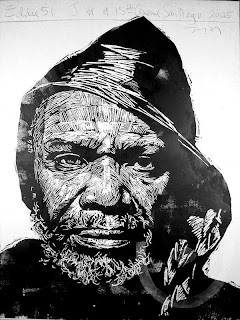 Shigley spends time talking to his subjects about their life, their history, their plans, their dreams, and why they are on the streets. He has been working on this series for several years and feels strongly about the value of getting the work out there, so that more people can contemplate the issue of chronic homelessness. 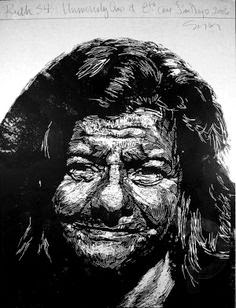 “ My dream for each portrait is to, in some small way, touch on the human condition.”
At the bottom of each image, Shigley hand-paints a symbol for each person(chosen from one of many that were used by U.S. drifters in the 1930s to relay information about places for other drifters to stay.) 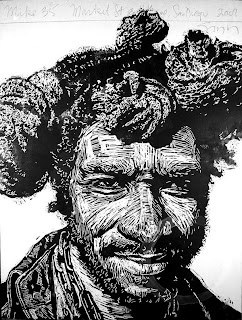 Yes, these portraits are on the surface descriptive, and the artist is interested in them as subjects to see how light passes over the terrain of their flesh; much in the same way Rembrandt did with his portraits, or how contemporary artists like Chuck Close has enlarged the figure so much we almost see them in abstract line, tone and contour.

The straightforward likenesses of these individuals reveal wrinkled, scarred and weathered surfaces and their personal histories are visible for all to see. 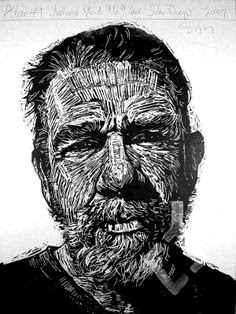 What has staying power with the viewer is the impressive scale of the work, and the charm of the subjects' personalities, which shine through their squinty eyes and toothy grins. There is a happiness that transcends their outward appearance and we glimpse a person beneath the facade, someone who at one point in their life was not as we see them now. 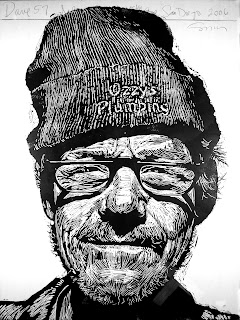 I applaud Shigley for keeping with this series, not especially for the documentary-ness of the project, but for the humanity of it. These people are individuals, with heart and feelings, like each one of us. They deserve to be seen, not forgotten, (as most of us would and do ignore them on the street, either because we can't bear to deal with one more person asking for spare change, or because we don't want the intrusion into our 'oh-so-important-and-busy'lives.) Not all of us ignore the street people out there, but how many of us go up to a person on the street and really take the time to say something - anything - to them? It's something to consider, and something to ask ourselves if we were in their place how would we deal with being on the street, and how would we relate to a guy who walks up and wants to take our picture for a portrait project he is doing? What would you do? 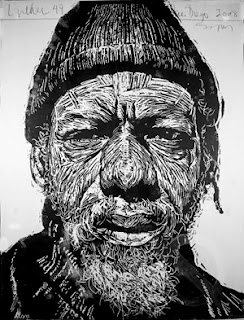 Posted by Tparker at 2:29 PM No comments: