Chizuko Yoshida (née Inoue) was born in 1924 in Japan. She is a Modernist artist, whose work reflects the developments of Japanese art post World War II. She is also the middle link in the succession of three generations of women artists in the Yoshida family(a rarity in Japanese art). She is the wife of artist Hodaka Yoshida (1926–1995). Hodaka’s mother, Fujio Yoshida (1887–1987), was a noted artist alongside of her husband Hiroshi Yoshida (1876–1950). Chizuko's daughter, Ayomi Yoshida (born 1958), is well known for her modernist prints and installations. 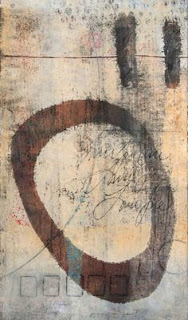 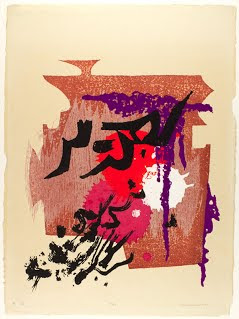 Chizuko's first art teacher was Fumio Kitaoka. She studied design at Hongo Art Institute until it was destroyed in WWII. Due to the frequent air raids she was sent to Aoyama until the end of the war, then in 1949 joined an art seminar of Okamoto Tarō. A year later she became a member of two important art associations: the Pacific Painting Society, and Shuyōkai. 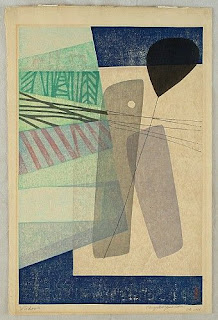 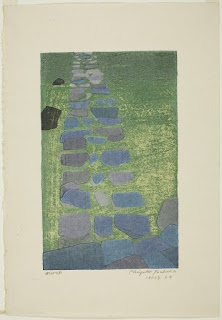 She joined two important art associations after returning to Tokyo: the Pacific Painting Society (Taiheiyō-Gakai), established in 1902 by Hiroshi Yoshida and Ishikawa Toraji and the Vermilion Leaf Society (Shuyōkai), a womens’ artist group, established by Fujio Yoshida (1887-1987)in 1920.

In the late 1940s, Chizuko started participating in a group of avant-garde artists, writers, and intellectuals called the Century Society (Seiki no kai), who met to discuss art theory and criticism. Okamoto Tarō, a prominent Surrealist painter and critic, led the group where Chizuko was exposed to discourse on the integration of Japanese cultural traditions with international modernist ideas. Under Okamoto’s influence, Chizuko's work moved toward abstract compositions. 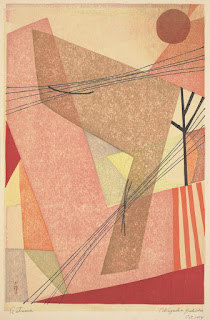 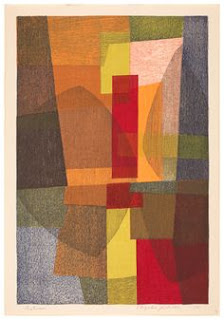 She began submitting works to the Taiheiyō shows and in 1949 was made an associate member of the group. It was through the Taiheiyō that she met Hodaka Yoshida. They attended Onchi Kōshirō’s art seminar together, held an exhibition of their works and in 1953 they were married. They have two children, Ayomi and Takasuke (1959- an art jewelry maker), and they have had long careers as independently inspired modern printmakers. 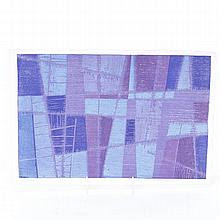 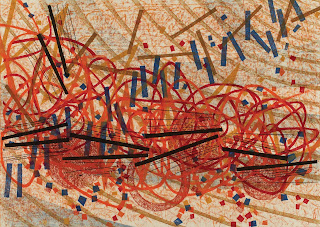 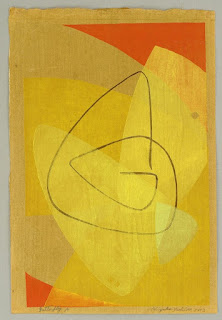 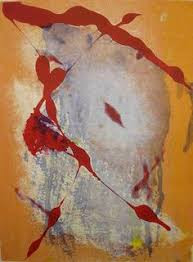 Chizuko eventually developed her own distinctive style. In her best-known abstractions, she expresses the ephemeral beauty of nature: the balance one finds between delicacy and strength, and the variety within repetition. Her prints range from geometric abstraction to music to nature. Underlying her compositions is an inner strength, the recollection of a moment. Later, in the mid-1960s, she embraced a 3-dimensional quality to her work. Chizuko’s best-known subjects are butterflies. 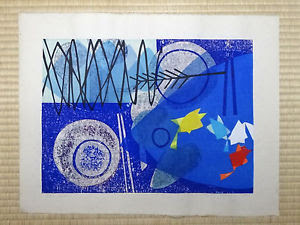 Chizuko has been a member of the Japanese Print Association since 1954 and she also helped establish the Women’s Printmakers Association in 1954. She has exhibited in the College Women’s Association of Japan since 1956 and in the annual Contemporary Women’s Exhibition in Ueno Museum since 1987. She has been invited to exhibit in many international art and print biennials. 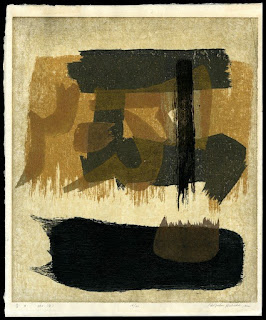 I thought I would give a salute to a longtime printmaker from Oregon whose work will be featured at the Los Angeles Printers Fair next weekend in Los Angeles, of course.
The Fair will be held SATURDAY, OCTOBER 14, 2017, from 10 am to 5 pm, and it supports the non-profit International Printing Museum and its educational mission.The Fair is suitable for all ages. General admission is $10 for adults and $5 for kids under 12 years of age. Students, educators, enthusiasts, collectors, typophiles, bibliophiles, graphic designers, artists, and professionals will enjoy the varied demonstrations and array of vendors. 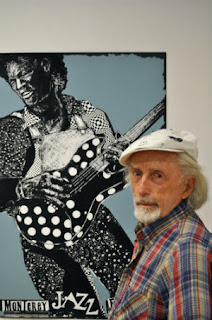 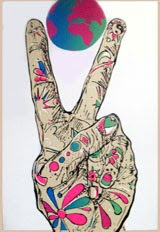 Printmaker-Artist EARL NEWMAN, a member of the 1960’s Avant-garde Los Angeles art poster scene. Newman has designed and printed the posters for the Monterey Jazz Festival for 50 years (a collection that has recently been acquired by the Smithsonian), posters for the Abbott Kinney Street Fair here in Los Angeles, and many of the Oregon Shakespeare Festival Theater Posters. The exhibition will feature work from his extensive and impressive portfolio.

Newman will be in attendance at the fair selling signed limited edition prints and sharing stories of his six decades working with the music, theater, and art worlds. He will also be selling a special limited edition poster print of the 2017 Los Angeles Printers Fair show guide cover, designed by the artist himself. Visit earlnewmanprints.com to see his work.

I wanted to give you a sampling of some of his greatest pieces.... 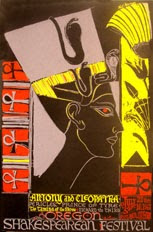 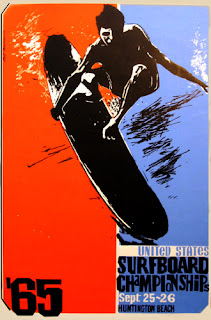 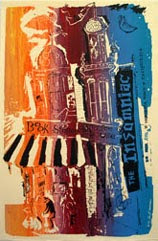 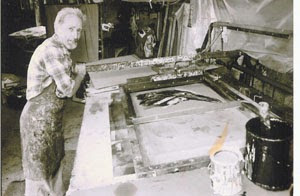 This is a chance to meet and greet with one of the best in the biz, folks. Take advantage of it if you are visiting LA next weekend.


Another special exhibit...
"Printing on the Silver Screen", will feature printing presses and artifacts that the Printing Museum has rented to Hollywood over the last 75 years. These presses have been featured in many movies and Westerns, including The Man Who Shot Liberty Valance (1962), Have Gun Will Travel (1957), even John Boy’s Press on The Waltons (1971). More modern rentals include TV’s Gilmore Girls (2004), NCIS (2010), Seven Pounds (2008), and the critically acclaimed film Inception (2010). Guests will have a chance to print a special “Newsies Banner” keepsake on the actual press rented for the cult hit Newsies (1992).