The Peace and Solitude of Shiro Kasamatsu's Prints 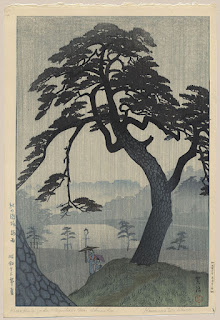 By 1920, Japanese prints were experiencing a Renaissance with collectors, and the hunt was on to collect new artists. A movement developed called 'Shin Hanga' (or New Prints), and artists in this movement brought into prominence the Japanese woodcut, which depicted landscape and figurative. The artist Shiro Kasamatsu is considered one of the top Shin Hanga style artists of this era. He was born in the Asakusa section of Tokyo to a middle class family in 1896, and throughout his career he produced nearly three hundred original prints. As you will see his work is superb and the effect upon seeing his images makes one want to commune with Nature. 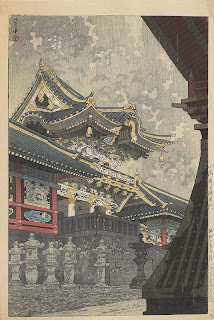 Kasamatsu started his art studies as a child, and in 1911 he became a student of Kaburagi Kiyokata, a master of the bijin-ga genre. He concentrated mainly on landscapes. Kasamatsu began to design woodblock prints for the popular print publisher Watanabe in 1919, whom he worked with until WWII. A lot of Kasamatsu’s blocks were lost in the 1923 Great Kanto earthquake and prints from that period are very hard to come by. In 1936, he was one of several Japanese artists included in a major exhibition of shin hanga printmaking at the Toledo Museum of Art. 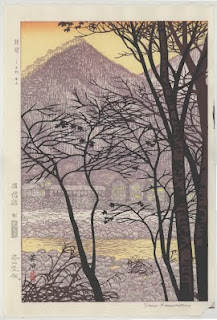 From 1952-1960 he published over one hundred prints with a Kyoto publisher, called Unsodo. In the 1960s he began to print his own blocks in the Sosaku Hanga style and he continued to make prints, but he did not choose to promote them with a publisher. His work took a personal turn and he made the work out of his love for the medium and the subject. 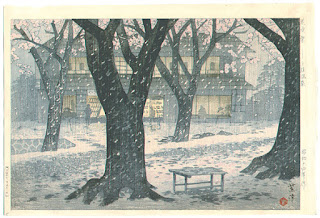 Western collectors have been especially attracted to his landscapes which depict traditional Japanese life and landmarks. They have a romantic feel to them, and remind the viewer of some of the work of James McNeill Whistler’s paintings and prints. Shirō was influenced by Hiroshige’s ukiyo-e techniques to draw in the viewer and give an image depth. He became famous for his nighttime scenes in the rain and snow. 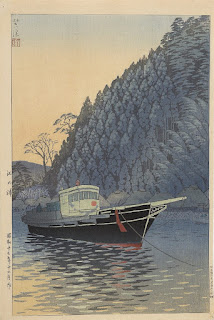 I think what attracted me to Shirō's prints initially was his simplicity and quietness. A peacefulness exudes from his works and that continues to attract print collectors today. The prices for his work are amazingly 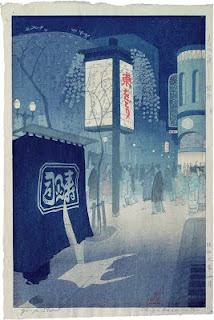 affordable, and one would be wise to pick up a few for his/her inked up collection. There are several site online where you can look at and purchase his work for a song. Enjoy, my inked up friends....
Posted by Tparker at 11:48 AM No comments: