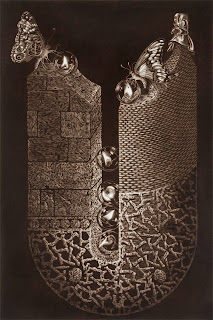 Deborah Lulu Chapman’s prints are a thing to behold. She has been posting her work periodically on Facebook where I first saw them, and I felt compelled to write and ask to see more. The first thing that grabs the viewer is how she manages to stun us with her exuberance for minutiae detail. Good Lord she loves detail! But that’s just the beginning. 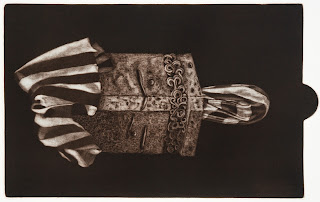 Chapman creates a dark space where little creatures crawl over oddly shaped concrete surrounding metal beams. A crystal ball shows butterflies the way out of their dark environments through a passage in the concrete to a light-filled sky. She presents arcane references to bas-relief birds of stone contrasted with peacocks with their feathers blowing in the unseen wind. Silken fabric unfurls freely, or is pulled through the brick and concrete hollowed tunnels like a magician’s trick. ‘See the pretty bird come out of the brick’, so to speak. 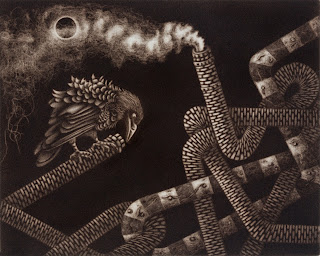 In another piece, Chapman veils the bird walking a tightrope between a billowing chimney to an old oak tree. The illusion of a space is presented, but we feel the air is suffocating. These mixed impressions of a place of non-spatial environments twists our perceptions of reality. Can these places co-exist? They obviously do. It’s just what is happening to the bird, or us, that gets us wondering how it, we, will ever get out of these places. 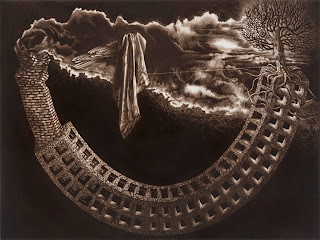 There is something satisfying in the idea of these brick and concrete structures. They are solid and they have a compactness that is mesmerizing like looking at an alien space ship. The butterflies and birds are our clue to preserving some aspect of human/mother nature and our planet. The surrounding space is dark and fathomless, but we are nurtured by the warmth of it. It is not cold, is it primal. We are created, we live and we die. Chapman gives us life in transformation, remembrances of lives lived, and preservation of the seeds of life to come. They are odd images, but they spark our imagination and make us want to see much, much more. 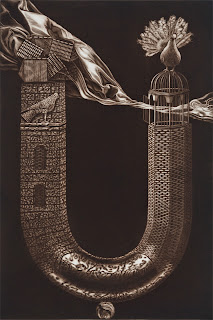 Chapman originates from Argentine, and now lives in Montreal, Canada. She has participated in numerous exhibitions, residencies, and received countless awards. To see more of her work, contact her at dluluchapman@hotmail.com