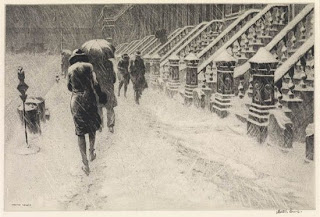 American painter and printmaker, Edward Hopper (1882-1967), was born in Nyack, New York. He was one of two children raised in an upper middle-class family of Dutch descent. He was well-educated and well-read in the classics. By the age of 17 he had already decided to become an artist, but his parents wanted him to him to have a stabile income so they encouraged him to study commercial illustration. While still in school, Hopper worked part-time with an advertising agency, where he did cover designs for trade magazines. He attended the New York School of Illustrating and then the New York School of Art. At the NYSA he studied with both William Merritt Chase and Robert Henri. Hopper once said of Henri that he was 'the most influential teacher I had'. 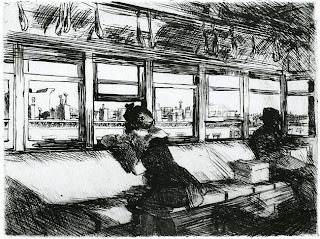 Hopper later went to study in Paris, but claimed no European influence except French engraver Charles Méryon. He also went to visit England, The Netherlands, France, Germany and Spain on his travels. He spent several years searching for what he became known for as his ’American Scene’ imagery. In 1913, Hopper sold his first painting  at the Armory Show.  Although his paintings were showing and selling, he still had to earn a living as a commercial illustrator; something he despised. 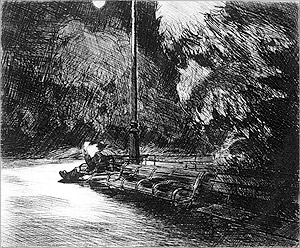 In 1915 Hopper chose to make etchings, which was a new market. He produced about 70 works, many of urban scenes in Paris and New York. Around 1920 Hopper’s etchings began to get the public’s attention and they began to sell more than his paintings. His prints reflected a similar sense of isolationism as his other work, but the stark black and white of his beautifully etched plates have drama, movement, jossling, bustling and an amazing quiet that can be found under a city streetlamp. His lines barely ‘describe’ his figures, but they are representative of every city’s figures. There are old and young and wealthy and working-class all wrapped up together, struggling to find their way through his sea of humanity with the sparest means possible. His prints are rich and textured and immensely satisfy our desires to be a part of his images. 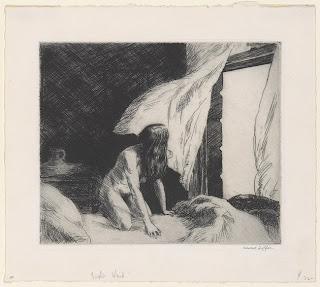 Hopper moved to Washington Square in the Greenwich Village section of New York City where he would live for the rest of his life. In 1923 he renewed his friendship with fellow artist ,Jo Nivison and they married soon after.  She was his lifelong companion, and became the female model for all his work for the rest of their lives.
The Depression of the 1930s had little effect upon him or his popularity. He lived well and sold much work during this period. It wasn’t until the 1950s when the new Abstract Expressionist movement’s style made Hopper lose the public’s attention, but he didn’t care because the new style didn’t appeal to his realist, puritan sensibilities. He and his wife kept to themselves, and in the last two decades before his death, Hopper’s health suffered from several ailments. He died in his New York studio, and his wife died several months later; bequeathing their joint collection (over 3000 combined works) to the Whitney Museum of American Art. Some of his major works are also found in the New York Museum of Modern Art, The Des Moines Art Center, and the Art Institute of Chicago. 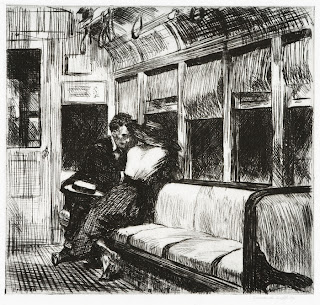 As for his influences, Hopper's visibility in art and popular culture is far-reaching. Artists such as Willem de Kooning, Jim Dine, and Mark Rothko have named him as an influence upon their work. Hopper's dramatic use of light and shadow has made him a favorite among filmmakers, namely Alfred Hitchcock, Terrence Malick, Sam Mendes  and Ridley Scott. Stores sell countless posters of “Homages to Nighthawks” featuring famous icons James Dean and Marilyn Monroe. He even influenced Japanese animation.
His birthplace and boyhood home was made into a non-profit community cultural center in 1971. It features exhibitions, workshops, lectures, performances and special events. It was listed on the National Register of Historic Places in 2000, and is known as the Edward Hopper House Art Center. www.edwardhopperhouse.org/ 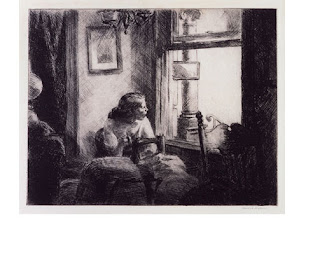 Much is made of Hopper’s lonely figures in the big city, and his solitary figures languishing by a window watching the world go by.  There is something truly arresting about his figures, where the person is enjoying finding a quiet corner of a park to sit a read a newspaper. His nighttime scenes harbor the most lonely, bleak outlook. People riding trains looking out at a skyline are like every newcomer to a big city; eyes full of wonder and dreams yet to be fulfilled. And a couple huddled together on a train in an intimate exchange, stops us and makes is wish we were one of those two people oblivious to their surroundings.
Hoppers’ two primary subject sources 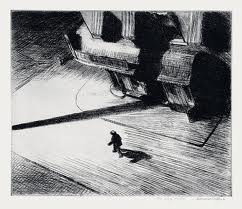 were average American places and people (gas stations, motels, restaurants, and street scenes) and rural landscapes. He would give the viewer a pulse of the city as being dangerous, but also a place where someone could find quiet and peace. His figures were usually placed in small, solitary confinements in his high-contrasted compositions, and his more intimate interactions between a couple make viewers become voyeurs. The emotional impact of his work is a sort of loneliness, quietude, and resignation, but something of knowing oneself also come through Hopper’s figures. They know what they want, even if it isn’t where they are at the present. There is an awareness of their environment, and a vision of where they want to go. Hopper’s work, like great cinema, infinitely fascinates us for what is he does not portray, what is not said, but then his images don’t have to. He gives us everything we need to know in what is not seen, what is not heard….
Posted by Tparker at 2:25 PM