Christopher Richard Wynne Nevinson,1889 –1946, was one of the most famous war artists of World War I. He studied at the Slade School of Art and later became affiliated with the Italian Futurist movement.

Born in Hampstead, he the only son of the war correspondent and journalist Henry Nevinson and the suffrage campaigner and writer Margaret Nevinson. He went to study at the St John's Wood School of Art and later on decided to attend the Slade School of Art. 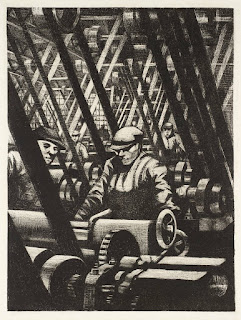 Nevinson also studied at the Academie Julian from 1912 to 1913. In Paris, he met several artists, including Pablo Picasso, shared a studio with Amedeo Modigliani, became acquainted with Cubism and also met the Italian Futurists Marinetti and Severini. In June 1914 he published with Marinetti, a manifesto for English Futurism called Vital English Art which declared Futurism as the only way of representing the modern machine age. He identified with the futurist movement, which focused on technology, industrialization, violence, and death. 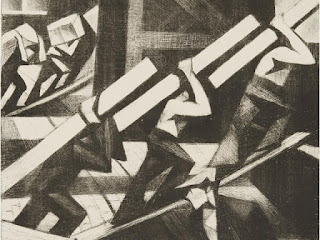 At the outbreak of World War I, Nevinson spent time in France with the FAU and the British Red Cross Society, mostly working at a disused goods shed by Dunkirk rail station known as the Shambles. It housed thousands of badly wounded troops, who had been evacuated from the Front and were practically left abandoned to fend for themselves. His works depicted soldiers suffering and dying on the battlefield. Some found his work too controversial to display. 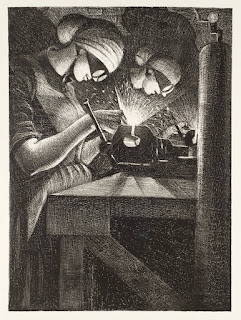 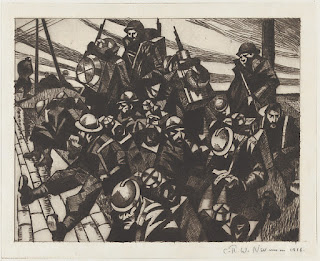 Nevinson enlisted as a private in the Royal Army Medical Corps and spent the rest of 1915 working as an orderly and laborer at the Third London General Hospital in Wandsworth. He was released from service in 1916 with acute rheumatic fever. 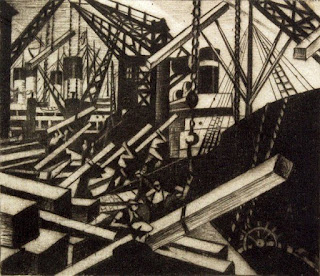 These experiences inspired him to create a powerful series which used the influences of Futurism and Cubism. In 1917, Nevinson was appointed an official war artist by the Department of Information, where he visited the Western Front. When he returned to London, he first completed six prints on the subject of Building Aircraft for the War Propaganda Bureau portfolio of pictures. Nevinson was now focused on individuals, either as people displaying heroic qualities or as victims of warfare. 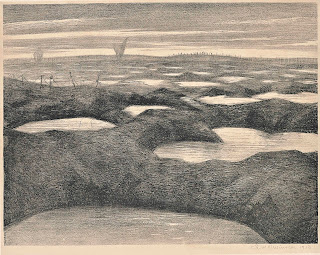 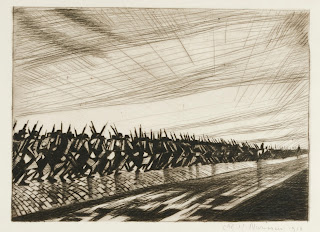 Shortly after the end of the war, Nevinson visited New York in May 1919 and spent a month there while his prints were shown to great acclaim. He claimed to have been the first artist to depict New York in a modernist style but several British avant-garde artists had painted in the city before World War I. His exaggerated claims of his war experiences, together with his temperamental personality, made him unpopular, and the result was that his post-war career suffered. 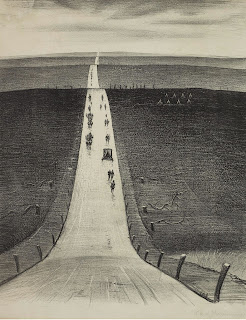 In the 1930s Nevinson painted a number of cityscapes in London, Paris and New York which were well received. His large painting of 1932 and 1933, The Twentieth Century used futurist devices to attack Fascism and Nazism. 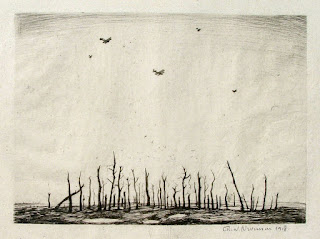 During World War II, he worked as a stretcher-bearer in London throughout the Blitz, during which his own studio was hit by bombs. Nevinson obtained a commission from the Royal Air Force to portray airmen which allowed him to fly in their planes to develop pictures of the air war. 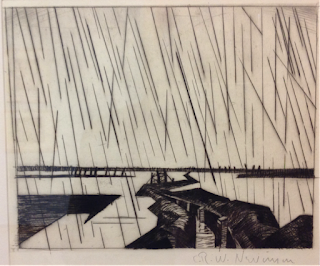 He presented a painting to Winston Churchill, which still hangs in Downing Street. Shortly afterwards he suffered a stroke which paralyzed his right hand, caused a speech impediment and left him wheelchair-bound. Nevinson eventually taught himself to paint with his left hand. He died at the age of fifty-seven. 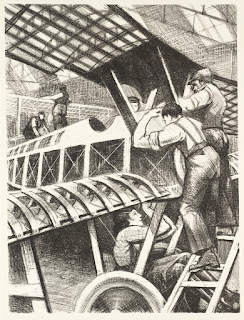 Awards:
1939 Associate of the Royal Academy
1938 Chevalier of the Legion d'Honneur 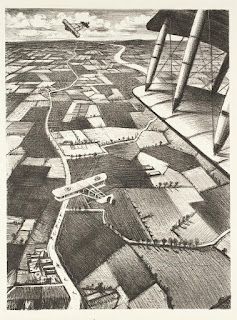 Posted by Tparker at 5:20 PM No comments: 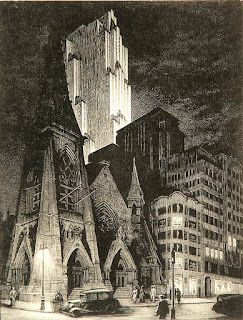 Grace Thurston Arnold Albee (1890 –1985) was an American printmaker, born in Rhode Island. She is recognized as an important American Regionalist printmaker of the twentieth century. 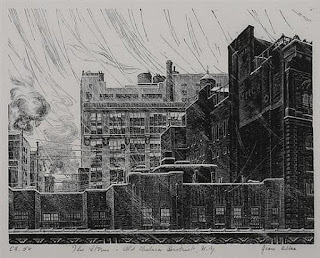 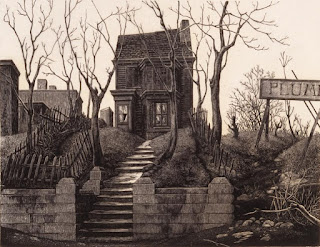 She won two scholarships to study art at the Rhode Island School of Design. She married in 1913 and made art while living in Paris with her husband, muralist Percy F. Albee, and their five sons between World Wars I and II. While there she associated with artists, including Norman Rockwell and Paul Bornet. 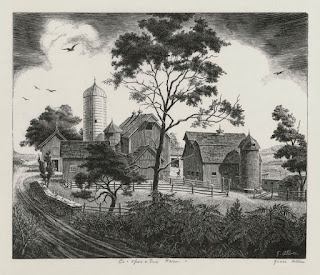 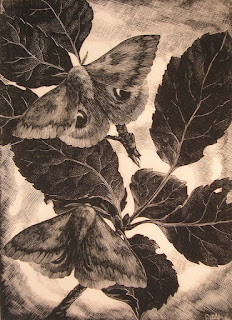 As one of the most productive periods of her career, Albee perfected her art and gained entry into the French salons, exhibited her works at independent French galleries and at art shows back in the United States. All of these venues gave her significant positive reviews from both French and American art critics.

Albee developed a passion for depicting urban and natural environments when she lived in France. Her work was received well; exhibited at several Paris Salons and had her first one-woman exhibition at the American Library in Paris in 1932. 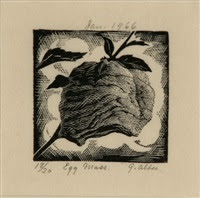 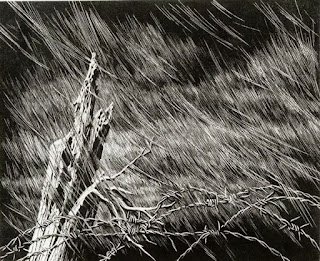 She and her family returned to the United States in 1933 and lived in New York City. In 1937, they moved to Pennsylvania where her subjects switched to rural themes. These images of rural life are considered her best known works.

From 1933 onward, Albee was able to dedicate herself to full-time printmaking and her art began to command serious national attention. Her work from this point forward demonstrates confidence as a professional artist. Her prints also became increasingly recognized in the American art community with the best printmakers in the field. 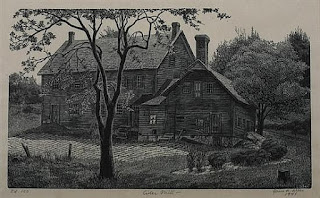 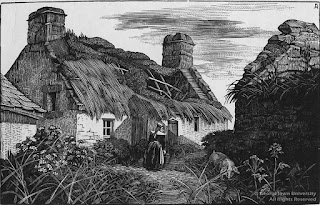 Back in the United States she began to gain significant recognition into museum collections. Albee became known for imagery about the effects of human habitation in the country and city. She became a keen observer of the world around her, and her career was shaped by outside forces affecting the American art scene, viewed through her personal life. Her images often narrate a story.

During her sixty-year working life, she created more than two hundred and fifty prints. She won numerous awards and honors, and worked actively into her 90s. 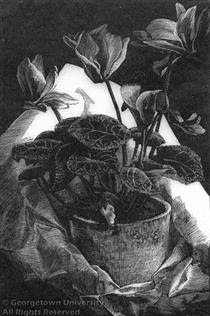 Awards:
1942 National Academy of Design Associate member in 1942, full member in 1946.
The second woman in the history of the Academy to receive the Associate distinction in the class of Graphic Arts,
The first female graphic artist ever to attain full Academician membership.
Upon her death at the age of ninety-five, she had accumulated over fifty awards. 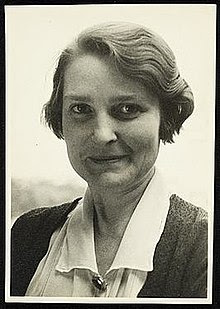 Posted by Tparker at 2:31 PM No comments: