The 'Other' Capriccios Prints by William Gropper 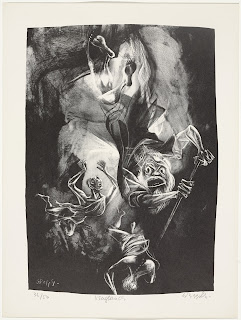 Just to scare the crap out of you, you must witness something weird and wonderful in William Gropper's 'Capriccios' print series. Talk about some compositions that can fill a child's dreams with nightmares..... Gropper's prints have some extremely creepy scary creatures. The prints are filled with maniacal faces, bared teeth and ghoulish eyes. These 'things' swoop in from the stealth of night and are eager to devour something (we hope it isn't us). I, for one, am both mesmerized by these creatures' appearance, and reviled by their ability to easily entice us to join them to a journey to the netherworld. They are fiendish, evil and you can't look away from them. 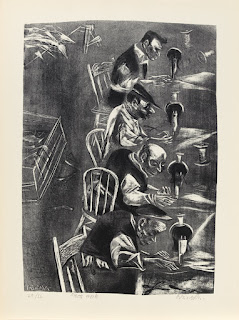 Gropper's works have an uncomfortableness about them. No sense of groundedness. Floating figures within wind-swept environments. No place to rest from the craziness that surrounds us. The artist knows how to keep us off-kilter. We can't find a quiet place to sleep, or hide from these 'things'. Night of the Living Dead is an apt description for some of this, but Gropper's roots for this series are found further back in time. A place called Spain, in the late 1700s, emanating from the critical vision of an artist we know as Francisco de Goya. There was another Caprichos series, one highly critical of the social strata of the day, and the social folly of the ruling class. Goya was scathing in his series and left no stone unturned that didn't deserve it. Those prints are exceptionally great and we can derive a better understanding of our own current political craziness if we but look at those prints and compare them to events in our own time. But I digress.... 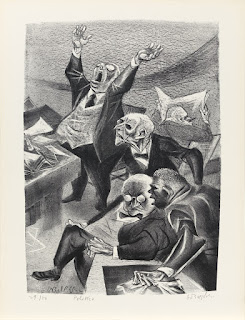 Gropper's compositions are chaotic, and uncomfortable. His lines are a bit lyrical, but also clipped and chopped up. I am reminded of some similiarities to the linear qualities of Willem DeKooning's paintings and drawings.

In this capriccios series, there are depictions of the working class. The endless toil and struggle of work that never ends. There are also apocalyptic scenes of ghouls and skeletal figures ready to sweep in to take a soul or two with them to wherever they came from. They are the undead, and we are their prey. 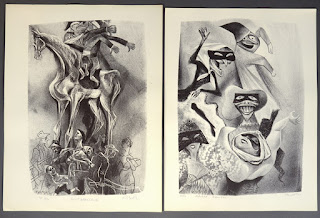 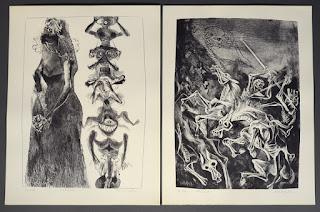 Other images of horses and piles of the dead remind us of works by Picasso during his Guernica period, but Gropper's work is more bleak. These legacies, and Gropper's interest in the work of Daumier, are evident in his prints. 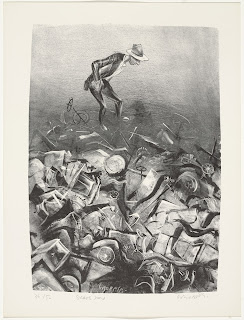 I will share with you Gropper's biography so you can know more his motivations for this richly dark series. Enjoy my friends.... William Victor "Bill" Gropper (1897 – 1977) was an American artist, best known for his radical political work. He was born in New York City, to Jewish immigrant parents from Romania and the Ukraine. While Gropper’s father was a university-educated man fluent in several languages, he was unable to find employment. The result was that his parents worked in abject poverty in the city's garment industry on the Lower East Side. 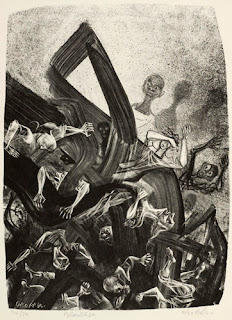 Gropper’s artistic beginnings came from his chalk drawings on the sidewalks in front of his home. At age 13, he studied art at the Ferrer School, under notable artists George Bellows and Robert Henri. When he graduated from public school, he earned a medal in art, and a scholarship to the National Academy of Design. A couple of years later he was offered a scholarship to the New York School of Fine and Applied Arts (now the Parsons School of Art). 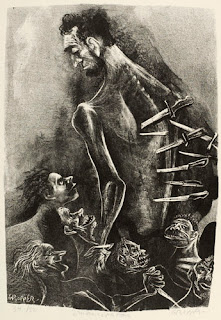 In 1917, Gropper was offered a position on the staff of the New York Tribune, where he earned a steady income creating drawings for the paper's Sunday feature articles. Gropper also contributed his work to a revolutionary socialist weekly called The Revolutionary Age, as well as to The Rebel Worker, a magazine of the Industrial Workers of the World. 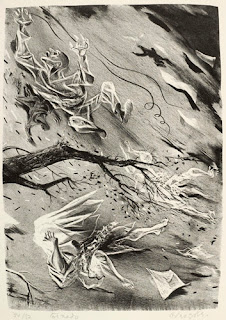 In August 1921, Gropper married Gladys Oaks, but the marriage was short-lived.
Three years later he married Sophie Frankle. Together, they built a house and raised their family in Croton-on-Hudson, New York. The couple spent a year in the Soviet Union, where Gropper was employed on the staff of the newspaper of the All-Union Communist Party, Pravda.

Back in the states, Gropper also worked on mural projects for the Works Progress Administration (WPA).
During the second half of the 1930s, Gropper dedicated his art to the efforts to raise popular opposition to fascism in Europe. Due to his involvement with radical politics in the 1920s and 1930s, Senator Joseph McCarthy, chair of the Committee on Government Operations, subpoenaed Gropper to appear before the House Un-American Activities Committee’s Permanent Subcommittee on Investigations in May 1953. Invoking the Fifth Amendment, Gropper refused to answer any questions and was subsequently blacklisted. This experience inspired him to create a series of prints entitled the Capriccios. 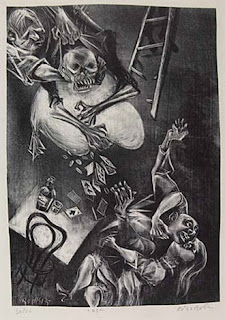 Writing on his Capriccios series, Gropper said, “‘The right to life, liberty or pursuit of happiness’ are mere words without meaning when mouthed by corrupt politicians, the State Dept., intellectual [sic] or artists who stand by in silence while bigotry is at work”.

Although he faced opposition to his work following the McCarthy hearings, Gropper’s Capriccios series presented a specific response to McCarthy’s committee, which struck an accord with the underprivileged public and enraged the corrupt politicians. Gropper’s Capriccios expressed his disdain for the American ideological culture of the 1950s.
Nixon’s Watergate scandal in 1973 sparked the artist’s last political series in his long struggle against political corruption.
Gropper died at the age of 79 in Manhasset, New York. 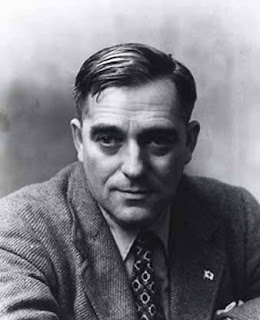 Posted by Tparker at 8:09 PM No comments:

Greetings to all my inked up brethren. I am wishing you all a happy and safe 4th of July, wherever you may be. Pull out the grill, heat up some hotdogs and burgers, drink a few cold brew and enjoy watching the kids splash in the pool, or skiing at the lake. It's a time to celebrate what's great about our country and being with family and friends. Enjoy this treasured print about Lady Liberty and the Star-Spangled Banner from Currier & Ives. 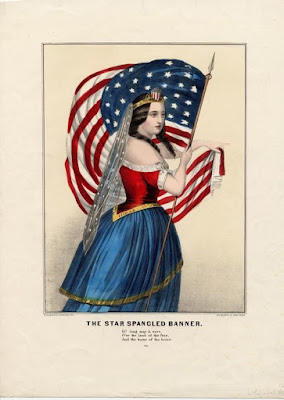