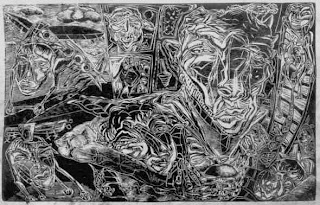 Mexico's love affair with printmaking goes way back to the time of the Spanish Colonial invasion. Prints produced at that time were mostly brought to the New Spain, via the Church, describing pictures of saints, stories from the Bible. Some printed images came by way of maps, describing the newly appropriated Viceregal territories; or for the curious and scientific-minded, anthropological prints identifying the physical attributes of the New World's 'human species' had a huge European audience for those people looking to find a new life in the Meso-American'colonies'. 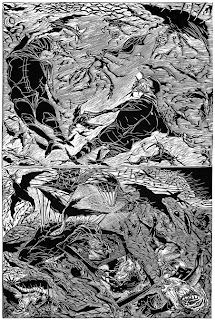 The printing process was introduced to the indigenous working class, and it, like architecture and decorative arts of the period, began to thrive. Prints to illustrate books and the movable printing letters produced an army of small papers and presses. Print shops that produced lithographs and relief prints grew as the country's war for independence came about. Those printmakers commented upon the state of affairs and societal customs and superstitions. Approaching the 20th century, printmaking in Mexico took a decided political turn, and printmakers like Jose Guadalupe Posada helped to fuel movements for the rights of the working classes and promote political agendas. 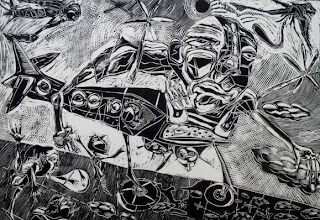 I have been fascinated with the brutal honesty one can find in Mexican or Latin American prints. Many artists have made images, knowing full well it would cause upheaval, and sometimes at great personal sacrifice. The flip side of Mexican printmaking is that which relates to literature and the surrealism one finds rampantly running the streets of this huge, wonderfully chaotic and exotic country. Complex images filled with what one can physically see, are sprinkled with one cannot possibly understand, yet magically it seems perfectly normal. Anyone who has read the works of Gabriel Garcia Marquez or Luis Alberto Urrea understands this concept well. 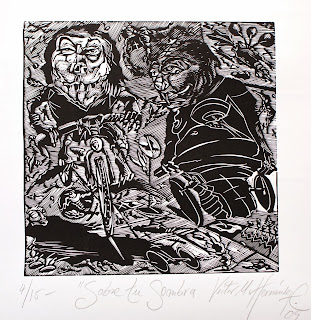 One contemporary Mexican printmaker whose works describe the more surreal side of life is Victor Manuel Hernandez Castillo. Castillo's work is initially something out of a acid-trip dream. There are monsters and ghoulish faces, strange planes with human heads and arms attached to spoked-wheels. People, using the term liberally, fly through his compositions as though in a Chagall-inspired dream, but they seem more appropriately linked to the current culture's vampire-laced fantasies of creatures out for an evening's feast. In any event, Castillo fills his compositions with loads of fun and creep. Castillo gives us ghoulish kids riding their bicycles like banshees to a place no one wants to ponder, horrific gargoyle-like creatures out of the movie "Ghost-busters" travel moonlit landscapes in search of their prey,and depraved bird-bats fly overhead in search of new victims. 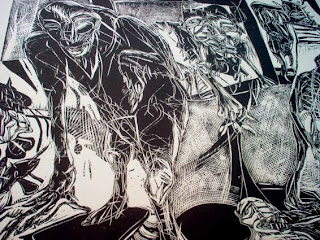 The netherworld Castillo presents to us is attractively repulsive. As much as we look, there is more to see buried within other images. His compositions are chock-full of creatures where we spend maybe more time than we want trying to figure out what they are. And for what it's worth, its all completely in bounds as far as Mexican surrealism goes. These netherworld creatures could stand for persons in our visible world, or stand as symbols for the corruption-laden operators who have plagued Mexico for years. I can't speak for Castillo's intentions. I can only describe what the images portend. Even a seemingly simple family portrait image with ancestors framed on a wall behind the primordial family unit has undertones of those whose family members weren't maybe so pleasant. 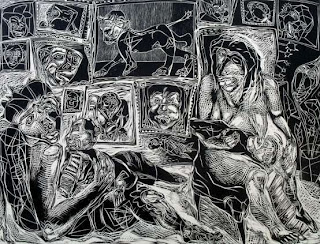 This work has teeth, and it bites into what rests slightly below the skin of this country, describes an undertone of fear and unrest among Mexico's sleeping giant population. If his images were truly to come to the surface, to the conscience of the people, some would go mad, some would cry out in pain, and some would go back to sleep because it would be preferable to think it was all a bad dream than see it as reality. Castillo places these images in our faces, and puts a slightly quirky and unreal twist on them to make us think they are surreal or humorous, when in fact they tell the truth. Looking at them we can see the clever disguises he puts in the images, but they get under our skin and fester like boils. Rising to the surface, these boils will burst and bring out the ugliness that one's conscious mind would choose to bury. These images cannot be ignored, nor can they be forgotten.