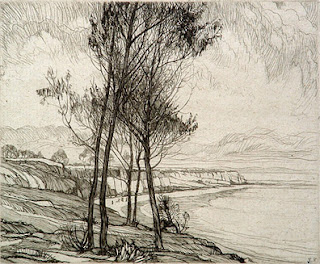 Okay, everyone. Take in a deep breath. Hold it. Then let it out slowly. Listen to your breath as you release it and imagine it to be the wind blowing through the branches of Roi Partridge's trees. If you can imagine that, you will understand what I feel when I see Partridge's works. 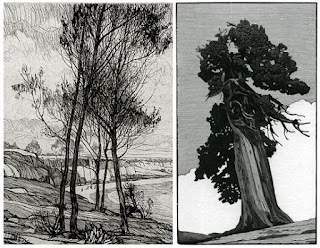 Partridge is an artist who loves the landscape and, apparently, trees. After looking at his work, one can sense not only a descriptive ability to render landscape, but a real sensibility for the only objects which dominate his compositions - trees. They have real presence, character, mass/volume, depth and powerful strength. Partridge understands the subject well, but understands moreso where to place the subject in the composition to great effect. 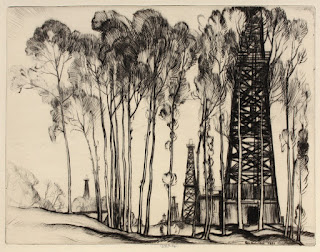 One can look upon Partridge's trees and understand the ancient concept whereby certain cultures worshipped them as conduits between the underworld and the heavenly realm. These were the only earthly objects that Mesoamerican and pre-Judaic cultures named Holy, or World Trees; having the capability to anchor themselves into the underworld while taking peoples' ritualistic gifts of torn cloth and hair to intertwine in their branches and take their gifts up into the heavens. 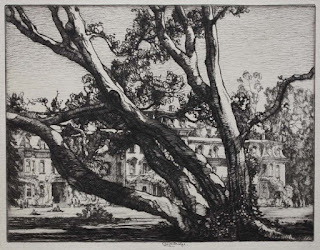 Partridge's feel for the landscape shows his interest in Japanese prints. (In fact, he had amassed a large collection of Japanese prints from his travels, ultimately donating them to Mills College in Oakland, California.) Still, his respect of the landscape is evident in how his drawn line is sinuous and tactile. One can feel the surface of his trees in how he draws them. Their contrast to the background - either billowing clouds or majestic mountains - is delicately handled and effectively recreates the space he witnessed.
They are living beings, his trees, and they make us want to go find them. He draws them as like Asian painters would paint the most beautiful branch out of a full tree. Their goal was to show us the most beautiful of all the branches. Partridge has chosen a group of trees to show these are the most beautiful amongst what could be many others. He has given us more than one branch, and our gift is the experience of seeing them. 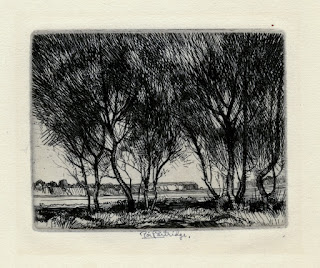 Roy ‘Roi’ George Partridge (American, 1888–1984) was a printmaker and teacher known for his sumptuous landscapes.
He was born in Centralia, Washington, the son of a newspaper publisher and a mother who played piano accompanying silent films in Seattle movie houses. At the age of four his family moved to Seattle, and in 1907 the family moved to Kansas where Partridge was enrolled in studio courses at the Fine Arts Institute of Kansas City, (now known as the Kansas City Art Institute). 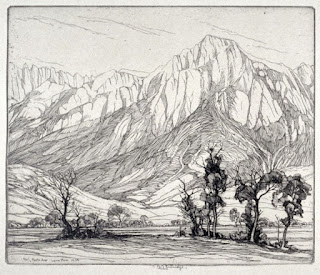 In 1909 he traveled to New York City to study at the National Academy of Design, and then went to study etching in Munich. He spent three years in Paris where he worked as a printmaker under the mentorship of Bertha Jaques. Partridge returned to Seattle when Germany’s troops were approaching Paris during WWI. In Seattle, Partridge was one of three Seattle artists who worked together under the name "The Triad". Partridge's future wife, the photographer, Imogen Cunningham, was also included in his artistic circle. 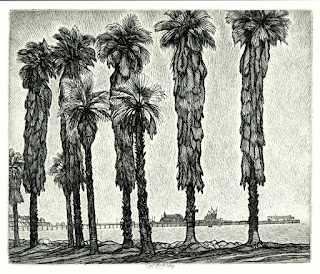 He moved his wife and children to San Francisco where Partridge worked as an artist in an advertising agency and he also illustrated several books. He began teaching at Mills College in 1920, and was named chairman of the Art Department in 1923. He became the school’s first art gallery director from 1925-1935. He retired in 1954.

The Graphic Art of Roi Partridge: a Catalogue Raisonné by Anthony R. White, was published in 1988. 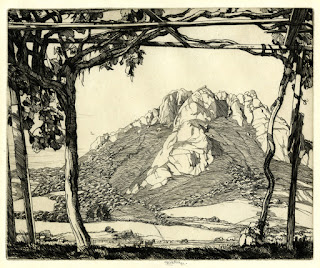 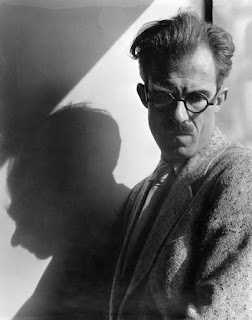 Anyone familiar with the artwork of Alberto Giacometti knows he was a man on a mission, a man possessed. His eternal search for the essence of man and spatial planes extended into his sculptures, paintings, drawings, and...prints! 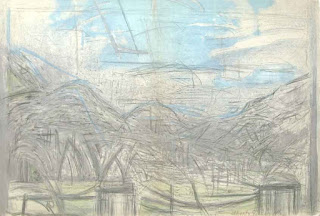 A surprise discovery of one of his rare color prints (above) brought me to look for more of the master's printmaking oeuvre. After some searching, I came across a largish body of work that will remind the viewer mostly of his sketches and drawings. The work is revelatory in that he produces prints that sincerely resemble his hand-drawn work, which for some artists not familiar with the printing process, a venture into the land of ink will produce only some modest success. 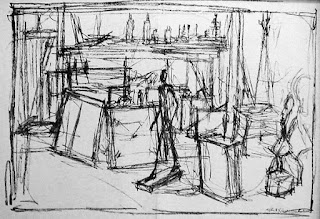 Giacometti handles the print medium with ease and I think, comparably, to his other linear works.The search is evident in how he seeks structure through the white ground. He is clearing out the unnecessary white space, and anchoring (or unveiling) the objects and figures to their appropriate places within the composition. This is classic Giacometti. 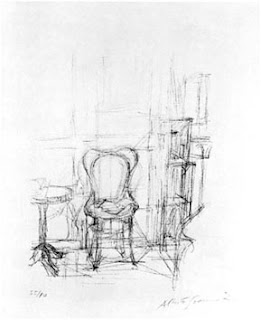 The work reveals only what is necessary for us to see. In that regard, we can compare Giacometti with the best Asian printmakers and painters. They, too, only portray what is the most beautiful part of a landscape, the essential elements of figures and actors. We know the landscape goes beyond the scope of their composition, but we become enamored of their selection and their skill to render what is the most important of a sea of detail into a solitary figure, or a lone branch of a tree. Giacometti does the same. 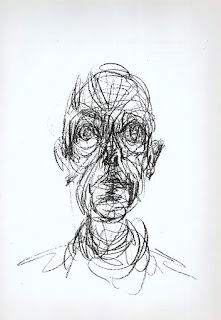 Likewise, when looking at this work, I saw a connection to the watercolors and late paintings of Paul Cezanne. He, too captured for our delight, the tantalizing layers of translucent brushwork and colors to let us see the essential still life and landscape. Giacometti does not delve much into color, but his sense of structural space structure is equal to Cezanne's. 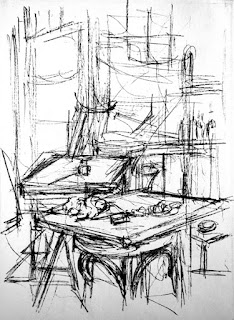 I enjoy the openness of Giacometti's work overall, but these prints, while spare in detail, are rich in what they do not describe as much as what they do describe. You can wander in his whiteness and sense what has been left out or deemed unnecessary for us to bother our over-taxed eyes with. He lets us imagine what is not seen, and that is a refreshing idea, because my dear inked up friends, it isn't always what has been inked, but it is also the surface on which we ink that is important to experience. 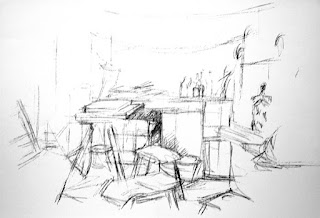 Bio
Alberto Giacometti (1901-1966) was born in Borgonovo, in Graubünden, Switzerland. As a child, he studied art under the supervision of his father, Giovanni. In 1919, Giacometti dropped out of school to devote himself to art. He studied at the Geneva School for the Decorative and Applied Arts for two years, then moved to Paris to attend the Académie de la Grande Chaumière, from 1922 - 1925. 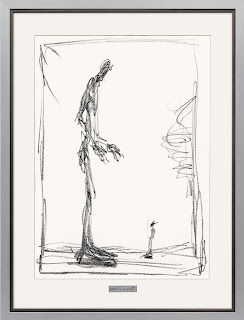 Giacometti's work was influenced by Surrealism between 1930 – 1935. His spatial compositions began to deal with extreme elongation of the figure. By 1945, the relationship between his figures and their environment became the core substance of his work. His figures often looked as though they were lost in a spatial void, which most critics felt were a mirror of the time's spiritual and emotional situation in pre-WWII. He briefly lived in Geneva during WWII, but returned to Paris in 1945 and remained there until his death. He began to make prints in 1953. 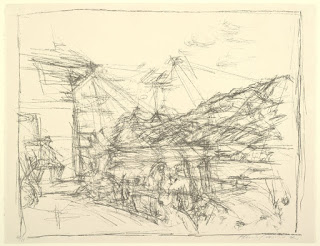