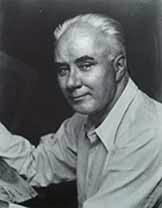 Noted American printmaker Adolf Dehn was a two-time recipient of the prestigious Guggenheim Fellowship, and he became one of the most important American printmakers of the 20th century. Throughout his artistic career, Dehn participated in the American Regionalism, Social Realism, and Caricature art movements. He began creating artwork at the age of six and by the time of his death, he had created an impressive body of over 600 prints! Imagine my surprise to find this very 'well-known' artist of the mid 20thc. - all but forgotten. Hopefully, this article will bring renewed interest in Dehn's work, and a new group of devotees. I, for one, am sold. 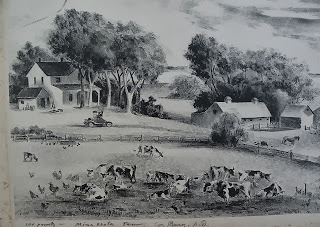 Biography
Dehn was born in Waterville, Minnesota, 1895 and died in New York City, 1968. His mother was a feminist, liberal, socialist member of the German Lutheran Evangelical Church and his father was an atheist and anarchist. Dehn went to the Minneapolis School of Art, then earned a scholarship to the Art Students League of New York. It would serve as a launching point for his career which would take him on travels around the globe and bring him fame and success. 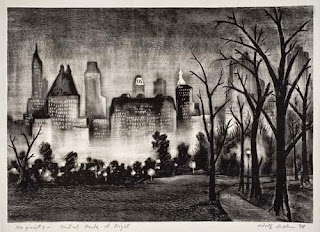 In 1920 Dehn was introduced to printmaking by George Miller and Boardman Robinson. While in New York, Dehn threw himself into liberal politics. 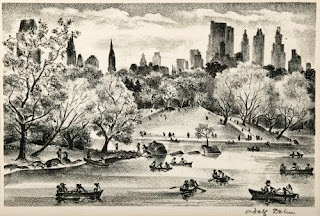 After graduation, he was drafted to serve in World War I, but as a conscientious objector, Dehn refused to serve in the military and he was imprisoned for two years, spending four months in a boot camp in Spartanburg, SC, and eight months as a volunteer art instructor teacher at a hospital for war victims in Asheville, NC.

During the 1920s, after the war was over, Dehn spent eight years in Europe and got a reputation as a satirical printmaker. (In Paris, where he made lithographs at the Atelier Desjobert.) His subjects ranged from social satire to naturalistic landscapes. His cabaret, park scenes, burlesque and scenes of Europe's roaring 20's contrasted against his Midwest regional-looking landscapes, but he wisely used them as a means for selling when he established his own print club during the Great Depression. A number of his caricatures appeared in Vanity Fair. 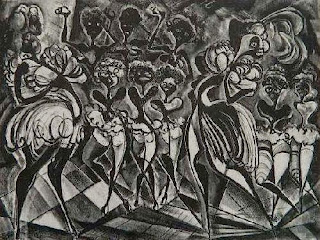 It was in Paris that Dehn met his first wife, Mura Ziperovitch, a Russian dancer who had left the Soviet Union.In 1929 he and his wife returned to the New York, but the country's economic depression made their financial hardships too much to bear, and ultimately contributed to their divorce. 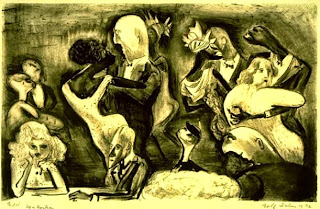 In the 1930s, Dehn's work began to appear in the New Yorker and Vogue. He earned a Guggenheim Fellowship in 1939, which allowed him to travel to the western United States and Mexico. 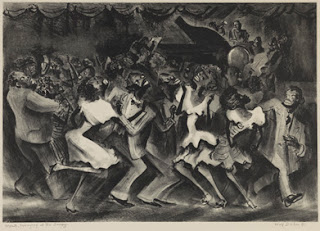 Dehn met his second wife, Virginia Engleman, (also an artist) when he participated with the American Artists Group, and they worked as artists for the rest of their lives. From 1938 to 1939 he taught at Stephens College in Columbia, MO. In 1940, he became a summer instructor at the Colorado Springs Fine Arts Center. taught printmaking to other American artists. 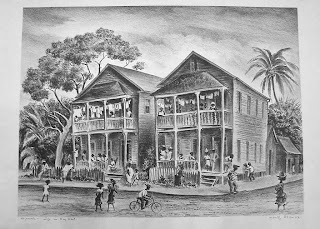 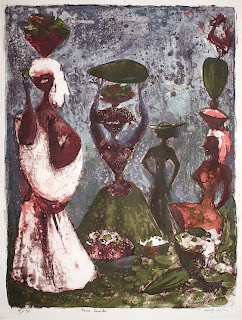 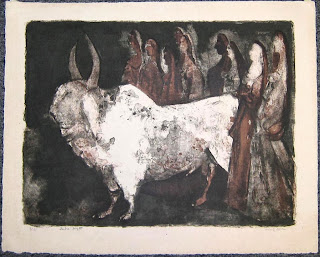 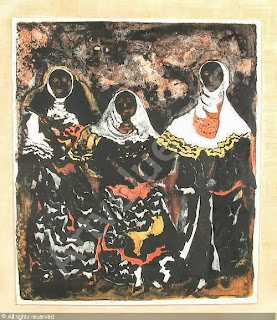 Adolf Dehn is considered a prolific artist of great range. His works are found in over 100 museum permanent collections, including the Smithsonian Institute. Dehn’s breadth of work represents printmaking’s victory in the mid 20th century, and he was one of the most important artists in the American Regionalism/American Modernism movements. Thank goodness I found this man's work. I hope this brings some inspiration to others in their own artistic paths. 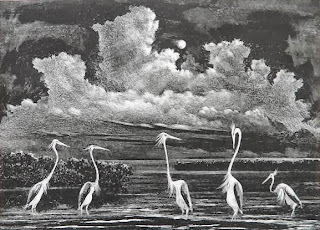 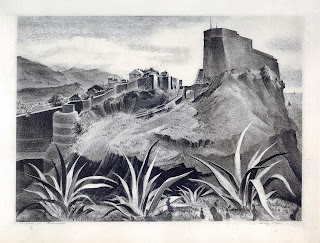 Posted by Tparker at 4:48 PM No comments: 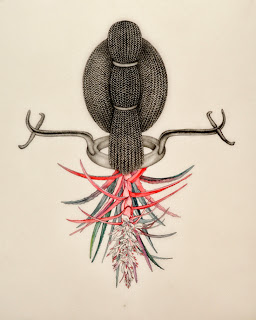 My fellow printmakers, you know there come some instances when you look at a person’s artwork and it either bores you, or it blows you out of the room. The latter is the case with the work of Caribbean artist Joscelyn Gardner. The discovery of this person’s powerful and thought-provoking work has been nothing less than a revelation and reinforces the idea that the printed image can communicate an informative message, but also transcend to a level of enlightenment. 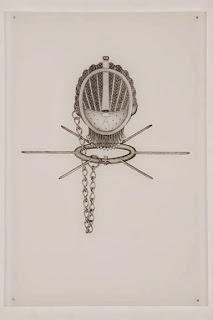 On the tiny island of Barbados, from whence Gardner hales, this artist has sought some acknowledgement of her culture’s ancestry and ultimately has disclosed the darker side of women’s existence and survival in the 18th and 19th century when slavery and brutality against women were as common as drinking one’s afternoon tea.

A self-professed feminist, Gardner looks back at the women from this island’s past and recreates personages of African descent through iconic and symbolic representations of women’s braided hair, slave ‘collars’ (shackles and instruments of torture) and botanical plants indigenous to the island. That may seem a strange combination of symbols but they are intertwined into the consciousness of this culture and its descendants’ legacies. In her Bleeding & Breeding series, and her Creole Portraits III suite, Gardner exhibits a body of work which focuses on Creole women’s secret use of exotic tropical plants on 18th century Caribbean plantations to induce abortion, the iron slave ‘collars’ were used to punish women slaves when they conducted abortions. 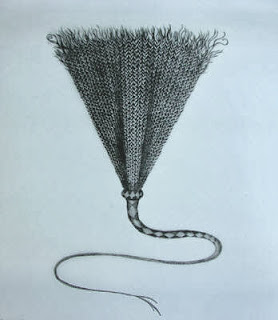 Each image’s braided hair takes on a woven design and pattern. We see them from the back of the woman’s head as though it is laid out before us like a curious specimen on display. They hover above the circular collar devices; their prickly, metallic edges visible, and below these collars are plants, hanging downward. The plants are the only colored part of these prints. Gardner’s rendering of these images is tightly analytic. They look like botanical prints from a distance until you get closer and realize there are other components that carry the proverbial wallop. 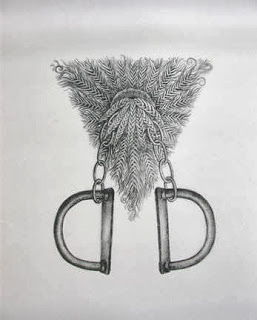 In another project, White Skin, Black Kin, Gardner addresses the Caribbean’s history of varying shades of blackness and whiteness as their Creole ancestry has intermingled since the 18th c. She seeks to address the history of black and white Creole women’s lives from the time of the Great Plantations. She “re-creates” her own vision of the past to expose shared realities of Creole women and Caribbean culture. 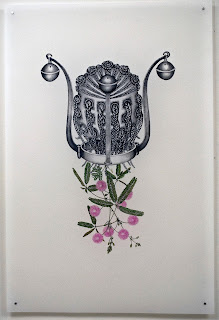 These works are strong and speak to a period of time most would like to brush past, but Gardner, holds our attention, commands it, and expects us to confront it. Like the messy slavery heritage the 18thc .and 19thc. United States would like to ‘move forward and forget’, this work directly confronts our past and makes is deal with the seriousness of it, the pathos, albeit through cold, clinical analyzation. The scale of these prints are life-sized which also sends a slightly uncomfortable ‘twinge’ up the back of our spines. How this all could happen is not the point. It did happen, and we can’t ignore it any longer. 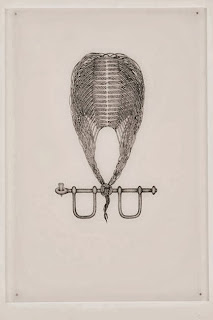 What is assured is that Gardner’s prints are sparking dialogue and discussions about women from this period and show that they were masters of their own domain, so to speak, in that they refused to be enslaved further to care for children that were a product of rape, or driving up the slave population, nor would they let their bodies be used as slave birthing machines. It was a difficult period, but it was also a period where women still made choices in the face of an existence with no visible freedoms. I applaud Gardner’s honesty in bringing these works to the world. We need more artists who have the guts and conviction to tell the truth. We need more artists like Joscelyn Gardner. 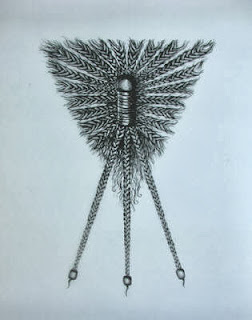 Bio:
Gardner is recognized internationally as a Caribbean artist.Born in Barbados in 1961 to a family that has been resident on the island since the 17thc., Gardner also spent time in South America and West Africa. She taught art at the Barbados Community College (1987-1999), founded and directed the Art Foundry galleries (1996-1999), and worked actively on many committees. She moved to Canada in 2000 and currently teaches in the School of Contemporary Media at Fanshawe College, London, Ontario.

Gardner’s work can be viewed at www.joscelyngardner.com 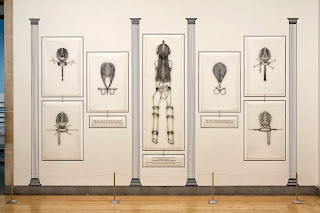 Posted by Tparker at 5:42 PM No comments: