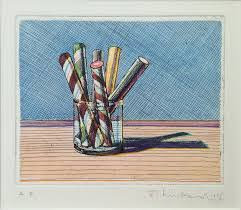 I have been enamored of Wayne Thiebaud’s work since I first saw it. His often electrifying colors, even used as shadows, show a masterful knowledge of color at its most evocative and seductive. He slathers on the brushwork like icing a cake, and admit it, don’t all of us have a hankering for some ‘sugary thang’ after seeing one of his cake and pie images? Admit it. Yes, you do. The man has made a lifelong pursuit of American subjects: diner food, and observations of landscape/cityscape, but he has always worked from life. He shows them off with such a finely orchestrated composition, you can't help wanting to devour one of his tasty morsels, or ride one of his extreme roller coaster California streetscapes. 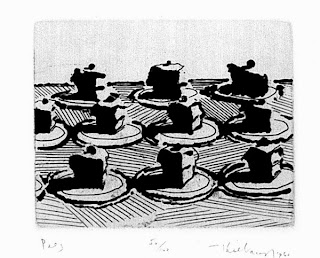 The fact that Thiebaud has been doing prints is no surprise to us. His drawn line is simultaneously expressive and diagrammatic. His play with head-on compositions and asymmetry reminds us of the work of Jim Dine and Richard Diebenkorn. His printed surfaces are just as seductive as his paintings. The man knows his craft, so we can sit back and enjoy the linear ride, so to speak. Take a look at these gems.... 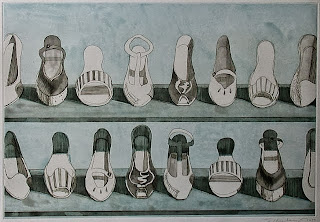 Wayne Thiebaud, b.1920- is an American artist known for his luscious, brightly-painted still-lifes of production line objects found in diners and cafeterias, such as pies and pastries. As a young man in Long Beach, he worked at a cafe named Mile High and Red Hot, where "Mile High" was ice cream and "Red Hot" was a hot dog. He also chose to paint landscapes and cityscapes of northern California and San Francisco. 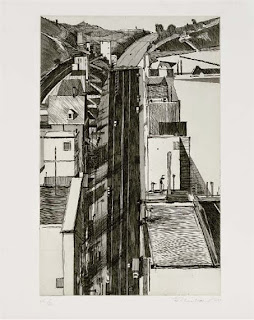 Thiebaud was born in Meza, Arizona, and grew up in a Mormon home in Hurricane, Utah and Long Beach, California. He studied commercial art at Long Beach Polytechnic High School and at the Frank Wiggins Trade School (a.k.a. Los Angeles Trade-Technical College) in Los Angeles and worked as a summer apprentice in the animation department at Walt Disney Studios. From 1939 to 1949 Thiebaud worked as a cartoonist, sign painter, and illustrator. He served as an artist in the First Motion Picture Unit of the United States Army Air Forces from 1942 to 1945. He attended San Jose State College (1949–50) and California State College at Sacramento (B.A. 1951/ M.A. 1953). 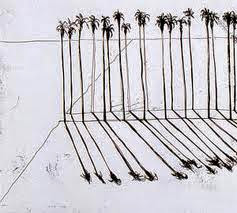 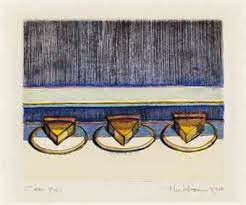 Thiebaud taught art at Sacramento Junior College (now Sacramento City College) from 1951 - 1960, and from 1960 -1990 he taught art at the University of California, Davis. He was active in theatre design work, created public murals and sculptures, and in 1954 he established a company to produce educational art films. While on sabbatical, he lived for a year in New York City in 1956–57, became friends with Elaine and Willem de Kooning, and came under the influence of the Abstract Expressionists, the Bay Area figurative movement, and predate proto-pop artists Robert Rauschenberg and Jasper Johns. By the ’50s his work employed the thick, gestural brushstroke for everyday subjects: pinball machines, bakery counters, cosmetics—rendering them in bright colors and strong light. He also co-founded the Artists Cooperative gallery, now Artists Contemporary Gallery, and other cooperatives including Pond Farm, having been exposed to cooperatives in New York. 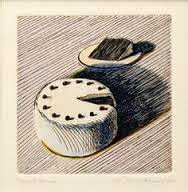 In the 60’s Thiebaud turned to landscapes, but made them abstract using strange and unusual angles and vantage points. His streetscapes, and cityscapes were influenced by the work of Richard Diebenkorn. His works are noted for their austere hyper-realism, and have been compared to the work of Edward Hopper and Jim Dine. In 1962, Thiebaud's work was included (with Roy Lichtenstein, Andy Warhol, Jim Dine, Phillip Hefferton, Joe Goode, Edward Ruscha, and Robert Dowd) in the ground-breaking "New Painting of Common Objects," at the Pasadena Art Museum (now the Norton Simon Museum of Art at Pasadena). This exhibition is historically considered one of the first Pop Art exhibitions in America. 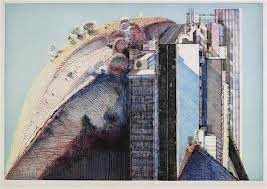 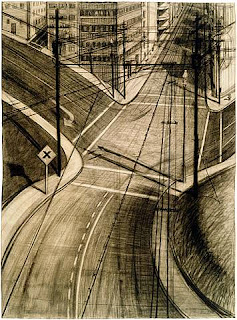 Thiebaud once said, "An artist has to train his responses more than other people do. He has to be as disciplined as a mathematician. Discipline is not a restriction but an aid to freedom. It prepares an artist to choose his own limitations…"

Clearly, these prints demonstrate a love of line, and entice us with what we see and what is left unseen. Our thirst for his images is unquenched, our cravings for more unsatisfied; for we can Never get enough of Thiebaud's keyed up color, his delicately simple enticements of rows and rows of candy and all things sugary. but I especially enjoy his challenge to reinvent the hillsides of California into the scariest and best ever thrill-seeker rides of our lives. Anything on those streets on wheels is in for one rollicking ride, my friends. 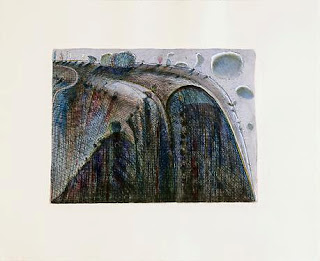