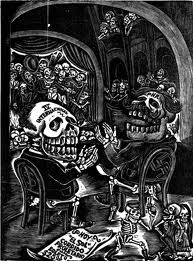 José Guadalupe Posada (1852–1913) was born in Aguascalientes, on February 2, 1852, and he died on January 20, 1913. Uncontested as his country's most influential printmaker, with a staggering body of work numbering between sixteen hundred to twenty thousand prints, his imagery included natural disasters, satirical commentary, politics, heroes and revolution, the common people, songs, assassins, tragedy and death, and miracles. Posada lived during one of the most turbulent times in Mexico.    He captured the essence of this period in his prints to the extent that they became icons to the Mexican people and thus to the Mexican Revolution.

Posada was one of nine male children born into a poor family. He was educated by his older brother Cirilo, who taught him how to read and draw. At the age of eighteen, Posada attended art school. He studied lithography and engraving in Trinidad Pedroso’s taller as a teenager and he also started to do political cartoons for a local newspaper, El Jicote. Unfortunately, soon after Posada worked for the paper, one of his cartoons offended a powerful politician, Jesus Gomez Portugal, and the paper closed. Posada then moved to Leon, Guanajuato, married and set up a commercial illustration business.The printing business was very successful in advertising, illustrating books and printed posters of all subjects, including religious icons like the Virgen de Guadalupe. It was a popular and thriving business until it was wiped out by a flood in 1888. Prior to that, Posada taught printing at a local preparatory school, and he moved to Mexico City where he went to work for  La Patria Illustrada, whose family was related to the famed Octavio Paz. Posada eventually left La Patria to work for a publishing firm run by Antonio Vanegas Arroyo. Arroyo had established a press specializing in inexpensive literature for the masses: historical, comedies, thrillers, songs, and histories of saints. These were sold in the city's plazas and markets. Arroyo and his son also founded several newspapers, including El Centavo Perdido, La Gaceta Callejera and El Boletín. During that period, Posada created a huge number of book covers and Illustrations. 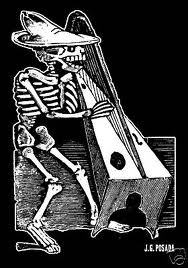 Posada was a popular cartoonist, artist and a leader of Mexican Expressionism. His work influenced many Latin American artists because of his satirical content. He is often spoken of, always in high esteem, as the ‘Mexican Daumier’, for his scathing commentary, but his work is stronger in the sense that he combined the Mexican cultural fascination with the dead (via skeletons) and produced acerbic, humorous illustrations that now are best known as folk art. On the whole that propels him from the one trick pony of an obvious visual cartoon to something more sublimely dual-edged.


In his Calaveras series, Posada depicts skeletons happily engaging in events and activities of the living. During the years leading up to the Mexican Revolution of 1910, his skeletons, his “catrinas”, were used as a metaphor for the corrupt society he lived in, so he attacked  politicians and anyone else he felt appropriate. On many occasions, however, Posada was thrown into jail for his 'artistic offenses' to Mexican society.   Posada saw the catrinas as representing the repressions of Mexican society and they reflected his own preoccupation with death. Now, his skeletal images have become synonymous with the Mexican holiday Dia de los Muertos (Day of the Dead). 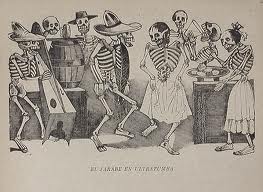 Unfortunately and surprisingly, Posada and his work were nearly forgotten by the time of his death. The tragedy of Posada’s death was that he was so poor he was buried in what is considered to be the lowest level of burial - a sixth class grave - in the Dolores Cemetery. When no one claimed his remains after seven years, as per the cemetery's policy, his remains were thrown out. 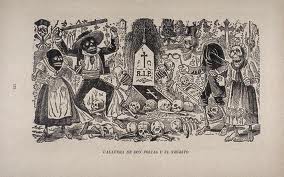 Recognition came to Posada after his death largely due to some other Mexican artists. If it weren’t for Diego Rivera who collected his prints, and Jean Charlot, who helped to re-circulate his work in the 1920s, Posada might have fallen into obscurity. The famed Jose Clemente Orozco was often heard to have credited Posada as a major influence upon his own artwork. Posada’s work can now be seen at the Bellas Artes National Institute, the Biblioteca de Mexico , the National Library of Anthropology and History, the Municipal Archive of the city of León, and they will forever be seen in during festivities celebrating the Day of the Dead.