The Hustle and Bustle of Isabel Bishop's Prints 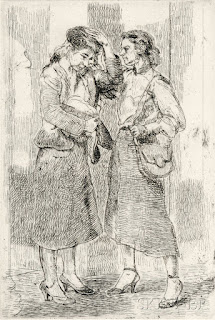 That's Inked UP extends its birthday greetings this fine day to Isabel Bishop, a pioneer of American art and feminism. Bishop's prints, as you will see, focus attention on a period of time when American women were transitioning from stay-at- home mothers, to becoming part of the young working class. 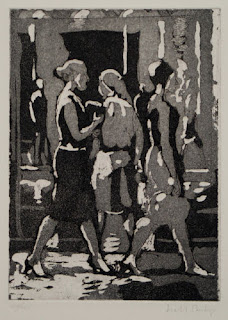 Her subjects are located on the bustling streets of New York during the 1930s to the 1970s. We can see solitary figures on a train, or reading a newspaper, but Bishop liked to portray groups of two and three figures as they interacted on Manhattan's street corners, or at a street side food stand. Her ability to get the viewer up close and personal, with out becoming voyeuristic, lets us into her world of the time. 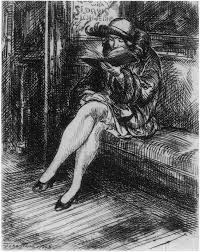 Bishop's fresh, linear style is descriptive and they enfold her figures like fabric. The line is has a tooth to it, meaning I feel it feel authentic, not flashy or slick. It resonates a quick hand, but also she is wrapping that line around her figures to help define them together as well as define the space in which they interact. They are well composed compositions, and any spareness is deliberate.

Bishop's prints about urban women shows the fashions of the day, and how they struggle to look cosmopolitan, and functional. Their shoes are sturdy, but stylish. The bulk of their coats and bags, evolve over the decades to shorts and shortened frocks. Her lines evolve also to tonal studies of figures walking down New York's busy streets, and they lose nothing in the transformation. 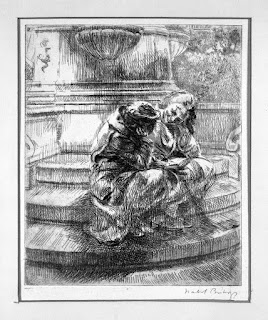 Bishop's career spanned decades and she remained in her Manhattan studio until shortly before her death. She enjoyed the hustle and energy of the city environment, and it is reflected in her prints and other works. We can look back in time to when opportunities for women in the work force were opening up and everything seemed possible. I hope you enjoy her work and pass it along to your colleagues. Her work deserves more attention.

Isabel Bishop (1902 – 1988) was born in Cincinnati, Ohio, and brought up in Detroit, Michigan, before moving to New York City to study illustration at the New York School of Applied Design for Women. Bishop's parents were descended from wealth and privilege. Her Father was a scholar, and her mother was an early activist for women's suffrage. 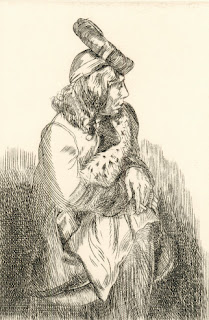 Bishop began her art education in a weekend drawing class at the John Wicker Art School in Detroit. She moved to New York after graduating high school to pursue a career as a graphic artist. She transitioned from illustration to painting, and attended the Art Students League for four years studying with Max Weber and Robert Henri. Her work was greatly influenced by Peter Paul Rubens and other Dutch and Flemish painters that she had discovered during trips to Europe. She was a leading member of the Fourteenth Street School of artists. 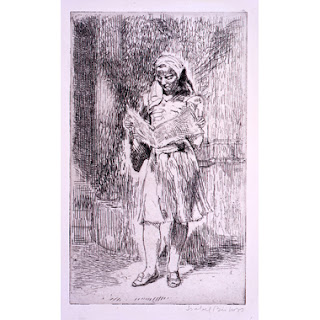 She taught at the Art Students League from 1936 to 1937. In 1940, Bishop was elected into the National Academy of Design as an Associate member, and became a full member in 1941. In 1938, she painted a post office mural, in New Lexington, Ohio as a part of the Federal Art Project. In the mid-1940s, E. P. Dutton publishers commissioned Bishop to produce 31 pen-and-ink drawings to illustrate an edition of Jane Austen's novel Pride and Prejudice. 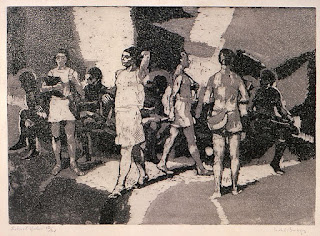 She became an artist known for her depictions of urban scenes in New York, from the 1930s to the 1970s, and she developed a realist style of her depiction of women of the day. Bishop became interested in the interaction of figures and the mobility of everyday life. Her mature style mainly depicts the inhabitants of New York's Union Square area. Her portraits are often studies of individual portraits; the emphasis on expression – or of solitary figures. Her style is noted for its sensitive modeling of form. 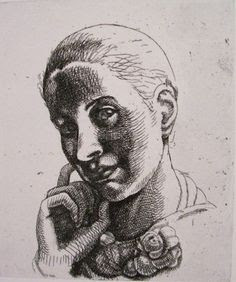 Bishop's work is a significant contribution to feminism, the "new woman" emerging in urban landscapes and understanding the shifting of gender roles of the time.
Posted by Tparker at 10:08 AM