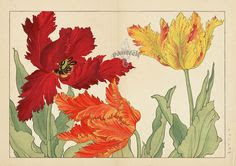 In thinking about all things spring, I came upon the botanical prints of Tanigami Konan of Japan. His floral prints drew my attention immediately for their brilliant rich color and simplicity of composition. The thing is, though, they did not remind me of any botanical print I have ever seen before. There is something non-Asian about them. The compositions feel more influenced by western ideals than Asian, and in fact, they are. 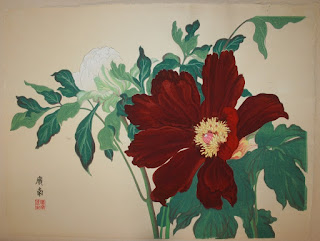 The work is wonderfully simple in execution and as we might find in Asian works, there is little or nothing to distract us from the subject. The subject is all there is to see, and as a viewer, we cannot want for more. What is portrayed is perfect. Konan’s delicate lines and carefully composed blooms lets the viewer smell them and imagine walking amongst them in a garden of our own making. 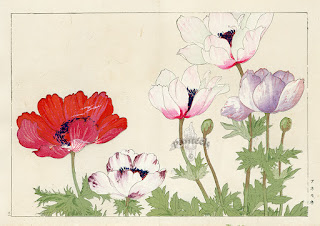 Admirers and collectors of traditional botanical prints will find them refreshingly pungent in color, less concerned with scientific detail, although they are quite accurately described. The issue here is not to separate the viewer from the image- to analyze it – but to immerse the viewer with the subject. Konan succeeds in this goal superbly. 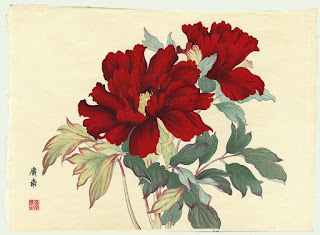 Tanigami Konan was born 1879 in Hyogo, Japan. He was a well-known artist of the Kacho-e Nihon-ga (birds and flowers) tradition, and he was the first Japanese artist to portray Western flowers. Konan produced five portfolios of prints called 'Seiyo Soka Zofu', (A Picture Album of Western Plants and Flowers), which were published in 1917/18. They were organized as a visual record of flowers, depicting them in full bloom. Four portfolios were devoted to the spring and summer flowers, and the last portfolio combined autumn/winter flowers and plants. 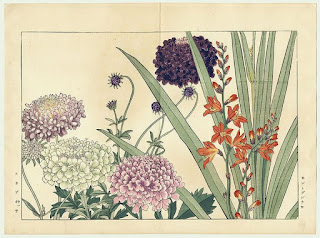 These prints display the very best flowers - tulips, lilies, daffodils, crocus, and iris of the botanical world. Their appeal was driven by the compositionally fuller style of the West versus the East’s more restrained version. 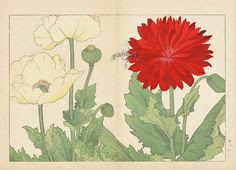 Konan is especially known for his peony series. (Peonies are one of my favorite flowers.) He was selected to create a series of twenty-four prints for the Teiten (Imperial Exhibition of 1917).
These prints were printed in a large format. Their bold, bright colors are stunning, and they are considered some of the finest floral images ever printed. 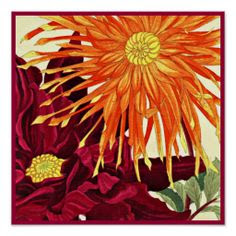 The choice to publish these prints was done at a very interesting time in Japan’s printmaking history; when older, traditional ways of printing were yielding to new western technologies.
Artists and printers in Japan were losing their living due to these modern developments, so they chose to pursue subjects that would appeal to Western collectors. Heavily influenced by the French Impressionist movement, they incorporated Western concepts of light, shade and perspective. 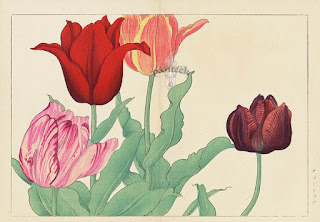 This new movement was called Shin Hanga or “new prints”, and it was an immediate success in early 20th-century Japan, during the Taishō and Shōwa periods. Shin Hanga subjects are vastly appealing: botanicals, landscapes, birds, animals and beautiful people. 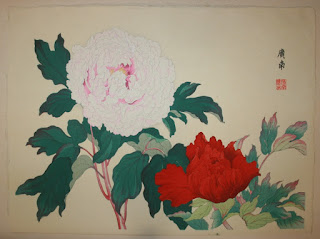 It maintained the traditional ukiyo-e collaborative system (hanmoto system) where the artist, carver, printer, and publisher engaged in division of labor. The movement grew from 1915 to 1942, then halted briefly during World War II. The American occupation renewed interest in prints and many were sent home by the American troops. 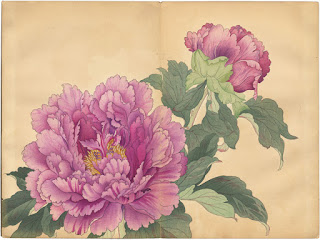 Still as popular as ever, botanical print collectors would do well to add some of Konan's beauties to their collections. Enjoy, my inked up friends, and partake of a little stroll through Konan’s garden of delights. 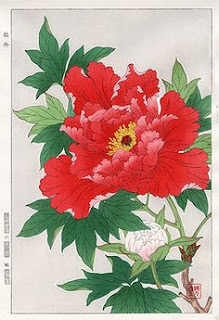