Printmakers are Sweetest on Valentine's Day! 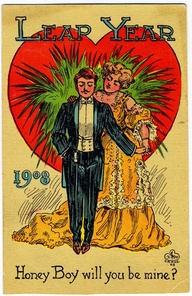 The history of Valentine cards is a special one, and wouldn't you know, printmaking is involved in this annual romantic tradition! To be sure, my fellow inked up colleagues, printmaking has it's hand firmly implanted upon the day for lovers. To be brief, I will give a little background to show how these images have evolved and connect them with the multi-billion dollar greeting card industry it is today. 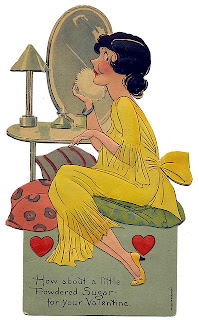 Since the Middle Ages, valentine greetings have courted prospective lovers, although it began with written verses after the production of paper in the 1400s. Paper valentines were then exchanged in Europe in the 1500s, being very popular in England. One of the first series of recorded valentine writings is attributed to Charles, Duc d'Orleans. He wrote dozens of valentines to his wife in France while imprisoned in the Tower of London. There are are some 60 remnants of his valentine writings still in the royal archives of the British Museum. By the 17th c., the tradition of writing to one's sweetheart was widespread in Europe and began to be celebrated on February 14th. 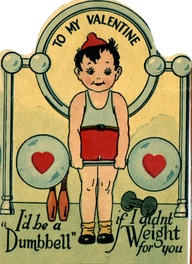 In the mid 1800s, a popular forms of valentines involved the photographic process of daguerrotypes, using a photograph of oneself in the center, surrounded by a decorated wreath. When the Civil War came around, the valentine became a true annual tradition - some had mirrors, or had a lock of one's hair enclosed. Any manufactured valentines at that time were hand-colored after the printing of an image. Fancy and decorative pieces with real lace and extreme artistry became the rage after the Civil War. A rare treat for collectors or admirers of this craft is when The Art Institute of Chicago, which has a collection of Victorian valentines with hand-drawn lithographic images and lace, puts them out for a short-term display. 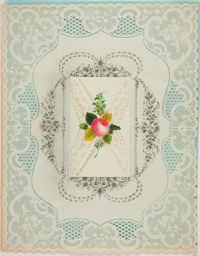 The Victorian era saw an increase in the making of valentines with the lithography process and it became a popular method for reproducing them in large quantities. They were given a 'penny post' mark of one penny on cardstock. A popular Victorian past-time was to invite friends over to go through one's scrapbooks of  valentine cards. The opulence of these cards made them valuable items and still very collectible today. 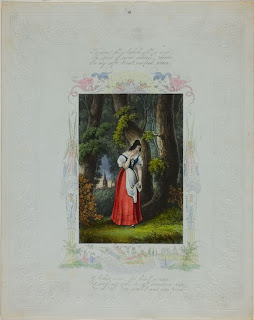 In the Americas, the valentine custom developed from an influx of Austrian, German and English immigrant customs, and according to legend, an English Valentine received by a woman in Massachusetts inspired the beginnings of the American Valentine industry. Sending and exchanging of love letters or valentines was a custom among the German immigrants of Pennsylvania. The fancy cards made in Germany were elegant, with honeycomb paper insets, embossing, foldouts and ribbon embellishments. Some German valentines were cutouts with movable parts. There were ships, cars, trains and later airplanes. When a paper lever was moved their wheels would go around and the characters' heads would turn.


In the 1700s, a practice developed where men would send their paramours a written booklet filled with hand-written romantic phrases and it included a selection of romantic responses which women could send back to their beloveds. Some 18th and 19th c. valentines included religious references with a sacred heart and an angel(Cupid). It is believed that nuns created these cards with hand-cut paper lace. They were delicate and took a long time to produce. 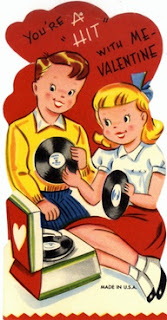 Around 1850, Esther A. Howland was a student at Mount Holyoke College in Massachusetts, and she began making Valentine cards after receiving a card produced by an English company. Her father was a stationer, so she sold her cards in his store. The business grew, and as she attracted more business her hometown of Worcester, Massachusetts became the center of the American Valentine production.Her mass-produced, machine-made cards featuring chromo-lithography found their way to the U.S. marketplace and stunned everyone when she made $5000.00 THE FIRST YEAR. (SOME OF THE UNIQUE CARDS SOLD FOR AS MUCH AS $50.00 A PIECE!)  Howland hired local women artists to help decorate the cards. She named the business the New England Valentine Co.At its peak, the company sold 100,000 cards a year. The early Howland cards are marked with a simple red "H" on the top left corner. 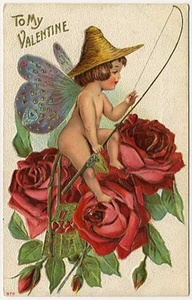 During the mid-19th c., the traditional valentine breifly was designed to look like money.  Known as "love notes," these cards were eventually banned due to their uncanny likeness to authentic currency. It was around this time that valentines also gradually became  more overly-ornamental. During the "Gay Nineties," for example, the cards were adorned with garish spun glass, mother-of-pearl, imitation gems or silk fringe. Evidence of the less attractive and what might be considered "cheap-looking" valentine is seen in the "vinegar valentine", a greeting which ranged in sentiment from the caustic to the comical. 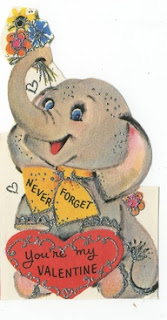 Both "vinegar valentines" and "penny dreadfuls" came under close social, religious and postal service scrutiny. The practice also led to a somewhat obscene number of valentines being produced which caused several countries to ban the practice of exchanging cards through the mail for a period of time. For example, in Chicago, late in the 19th c., the Post Office rejected some 25,000 cards on the grounds that they were "not fit" be carried through the United States Mail. 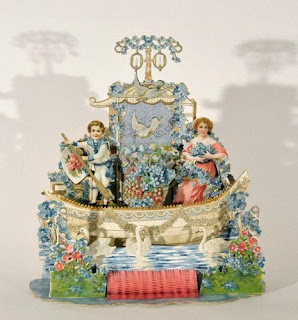 During the early 1900s, a card company called Norcross began to produce valentines and the Hallmark Company owns a collection of rare antique varieties which it will occasionally put on display. Today, a valentine card is usually accompanied by the more elaborate gifts of candy, flowers and perfume. Nevertheless, Valentine's Day Cards remain extremely popular . In terms of the sheer numbers of greetings sent annually, February 14 ranks second only to Christmas 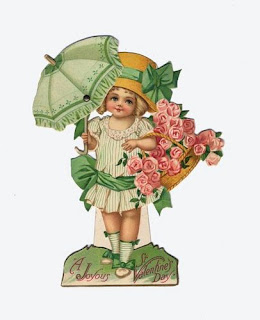 Vintage cards should be stored in acid-free, archival-quality sleeves or boxes and away from heat and direct sunlight. Cards should never be stored with their envelopes. The glue on the envelopes eventually yellows and will leave a stain on any material when in prolonged contact. 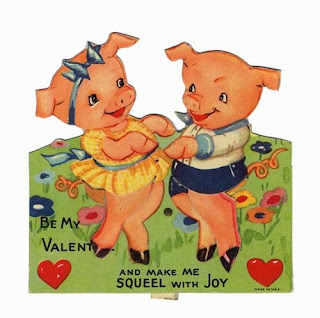 So the next time you purchase a box of valentines or buy one special Hallmark card, thank a printmaker. Without us this popular cultural tradition wouldn't be nearly as fun  and creative.Happy Valentine's Day! 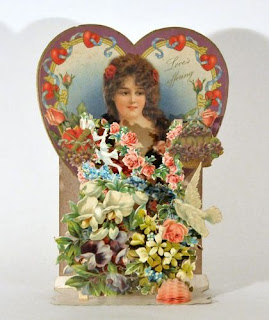