The Smoke and Fire Disasters of War by Adrian Barron

“I see printmaking as a game of two… between the work and the process. “

A young artist of British/Belizean nationality who describes the horrors of war is Adrian Barron( b. 1965 - ) He was born in Hanover, Germany and travels between Europe, Asia, and Central America making and exhibiting his work. I will focus on two of his series which deal with war and the effects of an invasion. 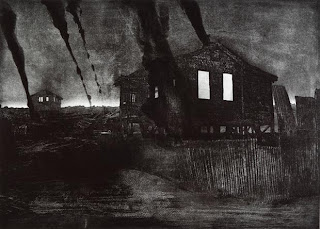 ‘Smoke/Sybils/After John White’s Algonquians’ is a series of prints which project scenes of a dark place full of dread. His images are left in black and white, although some more recent series are branching into some sophisticated colors combinations. Still, the feeling one gets from seeing these Smoke images is tense. A building enveloped in smoke foretells doom; loss of the physical house structure being on fire, and doom for the those affected by the tragedy lying before them. One doesn’t quite know if an enemy has already come and gone from a village of Belizean colonial homes, but it would seem apparent that the people inside are dead or they’ve abandoned their homes in the wake of an impending invasion. The enemy that perpetrated this disaster upon the village is unseen, making the situation uncomfortable because we don’t yet know if they left the area, or whether they will return. In any event, this is a place filled with death and destruction. 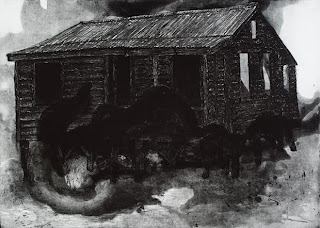 The presence of smoke billowing out of the homes is velvety and seductive, and it makes us hold our breaths so we don’t inhale.  As an series about war, it shows the us the aftermath of a battle, what is left to burn, as the troops push on to their next engagement. The quiet crackling of wood is the only thing one hears. We as viewers want to call out to the homes to see if someone is still there, if there are survivors, but the darkness of Barron’s view informs us that effort would be futile. The smoke disturbs us also in that it is a living presence.  We will move away from this area, but the soot and smell of the smoke has stained our bodies, hair and clothes. It has left its imprint into our skins, and while we could wash that physical residue away, the memories will stay with us a lifetime. 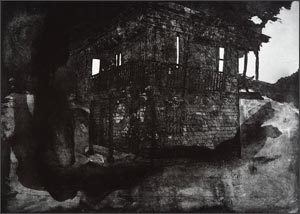 Barron aptly describes the residual effects as the memories of who lived in these houses,  the equation of the home as a repository of our lives  and collection of the family and clan’s soul. It is gone as are the people who once lived here. The loss is palpable….

Barron’s use of Belizean colonial homes are some throwback to his ancestral past, the wages of colonial aggression is world-wide, and Central America saw its fair share where their ancient ruins sit next to urban areas, and the people who currently live there have no memory nor any genetic connections to the past. They migrated there after the destruction of invading European forces in the 1600s. They aren’t from the land so the ruins mean nothing to them. Such is the situation in a hundred countries around the globe where people are slaughtered and towns and regions legacies disappear forever…… 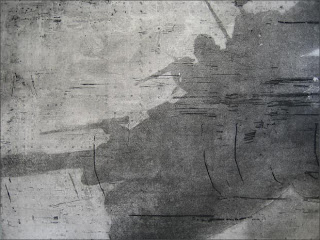 I enjoy the mastery of Barron’s craft, and the images are rich and multi-dimensional. His series of faceless people wearing khakis appear to be militaristic groups marching and taking orders. Not being familiar with the artists’ background, I can only imagine he has seen some military service. Those images are equally interesting with his camouflaged tank series  emerging out of billowing smoke and charging down upon the viewer. We see the tank almost the moment it tramples us. Set within a space of those images, the tanks would seem to come from all sides, and one could imagine quite well the chaos servicemen experience if they are in the middle of a battlefield. Black and white generalizes the picture and we aren’t caught up into it completely because we can detach from the scene, but in color, the effects would be even more startlingly chaotic. 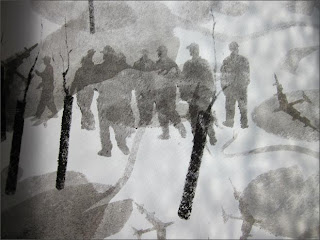 Barron’s website moves toward his more recent work where his garden is the source of natural wonder. The delicacy of those intimate pieces is in sharp contrast to the heavy-hitting nature of his previous work. I can’t say I care for the recent prints, yet they can arrest one’s view when compared with the earlier work. I will watch them as they move out of their embryonic phase.
I confess not to enjoy or like the images of war, but many notable artists – the German Expressionists, Matthew Brady, John Sevigny, Leon Golub, Eugene Delacroix and Theodore Gericault and particularly Francisco Goya each have given the public a lesson about its horrors, some more directly than others. Barron’s works allude to the horror, but he leaves out the gore, warning us effectively that human displacement and their sacrifices aren’t worth a damn.