The Fantasmic Realities of Konstantin Kalinovich 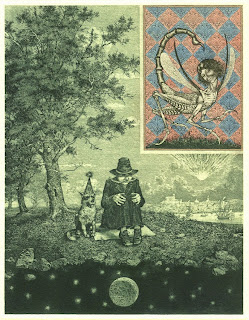 The prints of Konstantin Kalinovich….well what can one say, but WOW! Take a trip on his magical, mystical realism tour and one still can’t quite fathom the depth of his imagination. I mean, honestly, what kind of mind thinks up these kinds of characters and places? They are an astoundingly complex, delightful, creepy, wildly entertaining and downright bizarre. 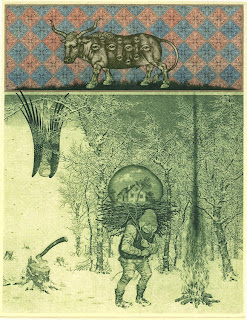 And one can’t stop looking at them, wondering how Kalinovich sees these images, let alone pulls them out of his creative hat the way he does. They are superb images, and they sweep us up into their little environs to wander around and share the space with old monks, creepy old men in big hats, moths the size of blimps, and apple carriages and dogs in party hats. They make me smile. 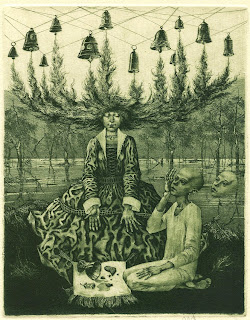 Kalinovich shows references from his printmaking and art ancestors, via the Beatles of the Northern Renaissance illuminated manuscripts, Jean, Paul and Herman Limbourg. He also divulges a reverence for the northern European landscape through the city of Vermeer and his light-filled skies. 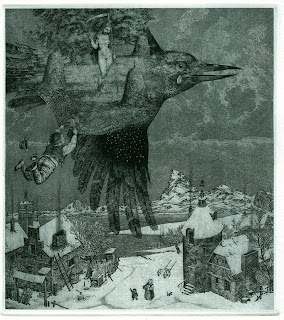 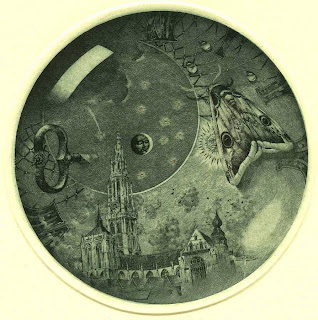 The artist’s play with scale also shows his love of Bosch, whose five hundred year old surreal images we still haven’t recovered from; and make us feel like we’ve drunk the wrong potion in a Alice in Wonderland storyline. 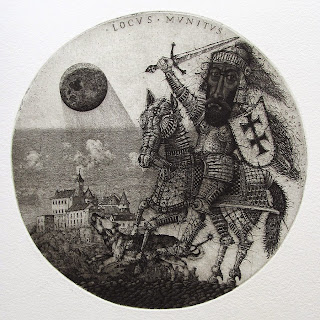 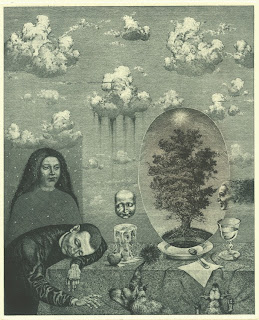 Kalinovich compartmentalizes his plots and spots of activity, and counters them with wildly out of Natural order mind-benders like skaters on a man’s lace collar, Ravens the size of elephants flying over wintry, snow-covered cottages straight out of a Pieter Breugel the Elder landscape. The snippets of color add a little surprise element, but one can imagine the color of these places quite easily without it. 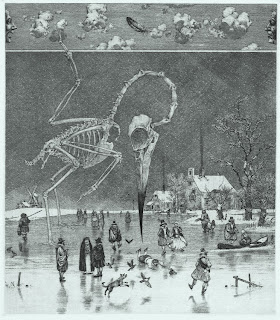 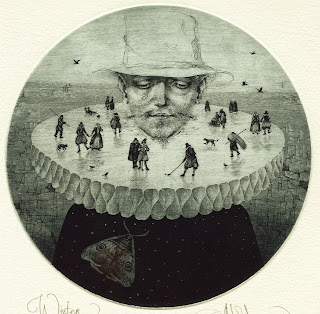 The churches and towns and castles come right out of the crusader days of the Middle ages, and his use of symbolic keys in keyholes to open doorways into even more bizarre worlds is almost too much for our poor creative souls to bear; but we must and we should open those doors to see what else Kalinovich has in store for us. We could learn a thing or two, I am sure. 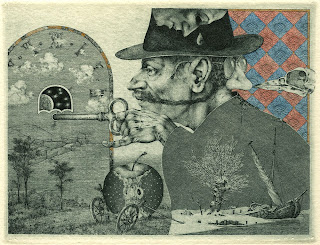 The staggering detail found in Kalinovich’s work is only surpassed by the minutia scale with which he chooses to operate. There is a history of Eastern European printmakers to work in a small scale, maybe in part due to available supply, but their mastery of the plate is incredible. Kalinovich is one of those printmakers who loves to wow us with his imagery, but the skill required to describe these tiny jeweled places sets us on our heels. 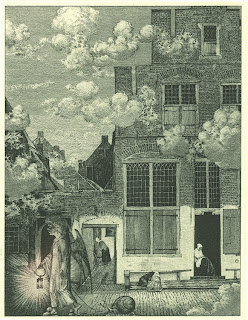 He is a master of the old school traditions, and he has brought it out of the past to reinvent our present. The fanciful subjects of his work doesn’t speak directly to any current political or social situations, but he plays with our perceptions of reality, and what we can imagine. But really, my dear inked up comrades, how many of us can picture anything as wild and wonderful as the fantasmic world of Kalinovich?