The Enchantments of Hawaii: Prints by John Melville Kelly 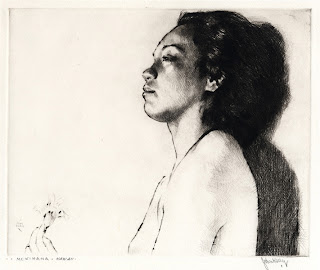 Our imaginations soar when we think of the beautiful Hawaiian islands; the people, the colors, the exotic flowers and warm waves lapping onto the beaches. Those things are fondly recalled of Rodgers and Hammerstein's "South Pacific", "Bali High" and the Tahitian travels by 19th c. French artist Paul Gauguin.

John Melville Kelly came to Hawaii in 1923 and like so many others, he fell in love with the place and stayed the rest of his life. He originally came from the deserts of Arizona, so its no wonder he became enchanted with the lush and exotic colors found in Hawaii. Kelly was a real estate executive, and eventually turned away from it all to become an artist. Thank goodness. He did paintings and prints, and the ones you'll see today show an unseen, or rarely seen, view of this man's 'Tahiti'.

Kelly drew people working on the beaches, fixing fishing nets, workers sorting products for market, women sewing on the ground, and dozens of portraits of women in exotic gowns surrounded by flowers. Some of the portraits resemble a more formal study of the figure, and the fact they are Polynesian is the only thing that separates them from  figure studies similarly found in thousands of portraits studios worldwide. As with the study of the woman pictured at the top, Kelly has an excellent grasp of line and defining the figure in a measured, cross-hatched study and it emanates sensuality. Contrasting that with his portrait of the old man pictured below, his line becomes more loosely defined but still captures the the figure's masculinity and elegant features . Here his line is more reminiscent of Anders Zorn, a contemporary of John Singer Sargent, and it looses and finds the figure in a energetic, coagulated frenzy. 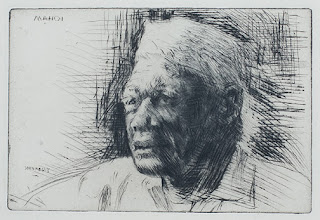 Kelly's love of the Hawaiian people was honest and not a touristy view of island life. His fascination with the Hawaiians and their daily existence is akin to the manner in which Gauguin portrayed his view of the Tahitians, but the work is less exotically symbolist-colored than Gauguin, and more in tune with the warm colors he found in Hawaii. This figure below is one where Kelly experimented with a detailed figure found within an abstract field of texture and color, 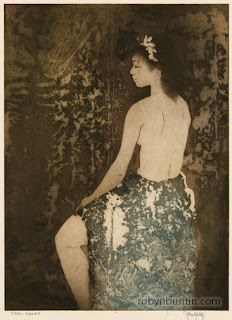 which for me is more alike to the lost and found figure compositions of Sargent and Whistler, and has references to the Asian-inspired prints of Cassatt. The homage is apparent, and we can be as enthralled with Hawaiian culture as he was.
Posted by Tparker at 5:15 PM