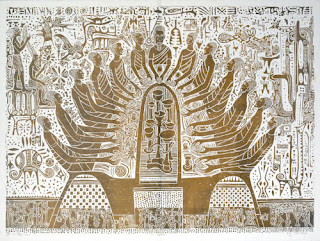 Wanting to explore some other parts of the globe, I recently came across the work of internationally renowned Nigerian printmaker, painter and sculptor Bruce Obomeyoma Onobrakpeya. He was born in 1932 in Agbarha-Otor in Delta State. The son of an Urhobo carver, he was raised as a Christian, but also learned traditional Urhobo beliefs. His family moved to  Benin City where he studied art under Edward Ivehivboje, and took drawing classes at the British Council Art Club. From 1953–1957, Onobrakpeya taught art at Western Boys High School, and  the Ondo Boys High School. 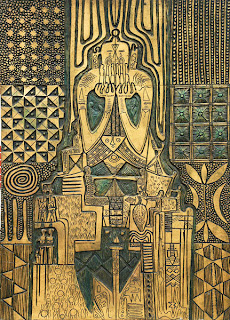 Onobrakpeya’s formal art training began at the Nigerian College of Arts, Science and Technology, (now called the Ahmadu Bello University) in Zaria. He was a founding member of the college art student group called the Zaria Arts Society, a.k.a. the Zaria Rebels. Onobrakpeya later said the group helped him shaped his artistic concepts and encouraged him to find his own style. He later attended printmaking workshops in Ibadan, Oshogbo, Ife and the Haystack Mountain School of Crafts, in Maine. 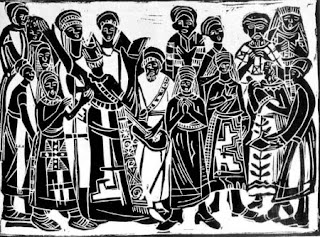 As one of the first generation of artists whose training was based on contemporary Western traditions of representational art, much of his work still portrays a style more connected with his traditional Urhobo folklore, myths and legends. He uses elongated figures similarly found in Medieval Christian and Byzantine art, and discards the renaissance rules of perspective to conjure up his own version of the supernatural. Onobrakpeya also has developed a writing style (Ibiebe) of invented ideographic geometric and curvilinear glyphs. These designs incorporate his interests in Chinese, Japanese, Ghanaian and Nigerian calligraphy with Urhobo imagery. Ibiebe glyphs are abstract, and for Onobrakpeya they seek universal truths.
Onobrakpeya has received numerous prestigious awards, including the following:
Honorary D. Litt. from the University of Ibadan
Honorable Mention from the Venice Biennale
Pope John Paul II Award
Fulbright Exchange Scholar
UNESCO’s Living Human Treasure Award
Nigerian Creativity Award, by the Federal Government of Nigeria

Since his first one-man exhibition in 1959, Onobrakpeya has exhibited his work widely throughout the United States, Europe and Africa. His work are included in the permanent collections of the Tate Modern, The Smithsonian Institution, The National Gallery of Art in Lagos and The Vatican Museum.  He has also been included in several documentaries on Nigerian artists and his own work. 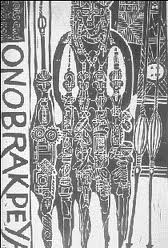 In a career spanning over fifty years, Onobrakpeya has discovered, innovated and perfected printmaking and relief sculpture techniques that are uniquely Nigerian. As a printmaker, he prefers to work in Relief, Collograph, and Etching. His projects range from historical portraiture, commentaries on social unrest, mythical tales and religious subject matter. The results of his efforts are rich, tactile surfaces and compositions with iconic figures, overlapped in a nebulous space. The colors are densely multi-layered and his images pulsate with life. They show a great appreciation for the complexities of dual existence both in this world and that realm of folktales, and cultural heritage. In that regard he share affinities with Paul Gauguin. His prints intertwine freely with his interests in other tangible media, and we are enriched from the experience. 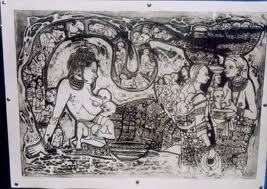 Finally, in 1998,  Onobrakpeya created an NGO, called the Bruce Onobrakpeya Foundation. bofoundation.org/ It organizes the annual Harmattan Workshops for international artist retreats in his home town of Agbara Otor. The foundation  encourages artists opportunities to improve and develop their skills, all the while increasing the public's awareness of African art .